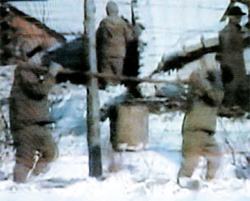 
In September 2001, Sim Chol-ho, a vice minister of North Korea’s Ministry of Post and Telecommunications, suddenly disappeared from the North’s political scene.

He returned as vice minister in 2009, and in February was named minister, but no information was available about his eight-year absence.

According to the Human Rights Commission of Korea yesterday, Sim did some time at Yodok concentration camp in Hamgyong Province, one of the most notorious political prisons in the North Korea. His transgression: criticizing the country’s intelligence authorities.

The human rights watchdog told the JoongAng Ilbo that Sim is one of 278 political prisoners who were jailed or still are in jail in the North. It will release the full list as part of a book on North Korean political prisoners to be published as early as this week.

It said that the book will include the prisoners’ real names, ages, occupations, years of imprisonment and alleged crimes, as well as stories of life in the prisons. A South Korean civic group revealed a similar list of about 500 political prisoners, but the commission has narrowed that list to 278.

The commission said that four North Korean defectors once imprisoned in political prison camps helped with the book, including Jeong Gwang-il, 49, a representative of the Free the NK Gulag, a nonprofit organization.

Jeong and Sim were imprisoned at Yodok prison until 2003. Jeong was imprisoned in April 2000 after he made contact with a South Korean trader in China. He defected to the South after being released from Yodok in April 2003.

When Sim was in prison, he only received about 200 grams (7.05 ounces) of corn powder to make into soup each day and lost 30 kilograms (66 pounds) of weight in a few months. “He was eating grilled rat,” Jeong told the JoongAng Ilbo. “He suffered badly from malnutrition, and could barely digest food later.”