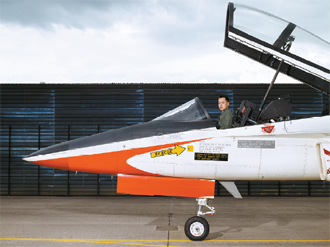 “A T-50A Advanced Training Jet with its Pilot in the Cockpit” (July 2011), above, and “Four Soldiers Before a Mock Cavalry Battle” (May 2010), below, are part of photographer Oh Hein-kuhn’s new solo show “Middlemen,” which focuses on Korean soldiers. “Middlemen” starts today at the Artsonje Center in central Seoul and runs until June 17. Provided by the gallery

A photographer well known for his “portraits of anxiety” taken of women has finally added men to his portfolio.

The exhibition at the Artsonje Center in the art zone east of Gyeongbok Palace in central Seoul includes 37 large photographs of everyday soldiers in the Korean Army, Navy and Air Force.

Though he received support from the Ministry of National Defense, Oh’s photographs are far from military promotions. Quite purposefully, the soldiers pictured don’t look especially gallant, though they’re not depressed, either. Most simply stare with emotionless faces. Some stand up stiffly, while others are in more comfortable poses.

These neutral portraits invite a sense of delicate unease just like the ajumma and teenage girls of Oh’s former series. Without purposeful expressions, the faces deliver a message of subtle and ambiguous anxiety.

“I have seen anxiety from nearly everyone’s face - not serious, but never disappearing, like a mild fever,” the 49-year-old artist said in a press preview for the show yesterday. “In particular, I’m interested in the anxiety felt by people whose identities are caught between two worlds.”

He explained that those people include Korean ajumma, who were no longer confined to home life but also not sufficiently involved in social activities in the late 1990s, when Oh photographed them. In the same way, teenage girls are neither children nor full-grown women and struggle to place themselves between these two groups.

“And the young soldiers of today find themselves in a similar conundrum,” the artist explained. “My works see them as individuals rather than as units of the military. They are individuals integrated into the military situated in the middle ground between ‘we’ and ‘I,’ and I think this is where their anxiety stems from.” 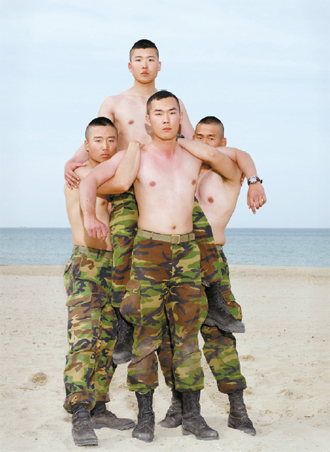 “It is remarkable nowadays,” he continued. “When I went through military service, there was only the concept of ‘we’ - no ‘I.’ But young soldiers of our time are much more linked to society outside the military through the Internet, so they seem to face more conflicts between ‘we’ and ‘I.’?”

Oh said he was careful to choose typical soldiers when deciding who to photograph, turning away recommendations from military officials who wanted to focus on the most handsome and well-built soldiers.

In the photo shoots, Oh tried to get the soldiers to relax a little bit, but he couldn’t overcome the military rank that had become such an important part of his subjects’ lives. For example, a photo of two naval solders shows one who is very relaxed while the other is unusually stiff. The uncomfortable one is, of course, of a lower rank.

Oh said this was just another element of his work for viewers to ponder, though it might be a bit puzzling for those who never served in the military.

“I’m afraid that female viewers just might not be able to figure it out,” the artist said, smiling.