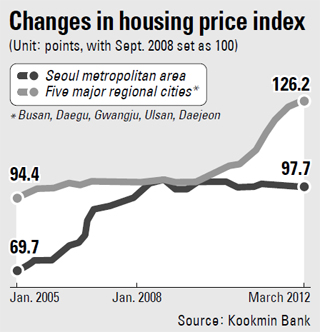 A three-year upward momentum in the regional real estate market is petering out as consumers are gripped by pessimism, a report by a state-run think tank said yesterday.

Long after the Seoul metropolitan real estate market became locked in a “deep freeze,” regional property markets that previously benefitted from demand outpacing supply are now showing signs of being sickened by the same malaise.

A report by Korea Development Institute yesterday said that the non-metropolitan housing market is “showing signs of stabilizing” after reporting both rapid housing price hikes and increases in transactions.

According to Real Estate Serve, an online property data provider, housing prices in regions such as Gangwon, Gwangju, Daejeon and Busan only rose between 0.59 percent and 3.18 percent from Jan. 1 to April 26. This compares unfavorably to a growth bandwidth of 15.11 percent to 20.73 percent for the whole of 2011.

Until last year, robust regional transactions stood as the one bright spot in the local property market, which has been crippled by inertia in its largest marketplace - Seoul and its environs.

According to a report by Bank of Korea late last month, housing sale prices in the metropolitan area rose 0.5 percent in 2011. In non-metropolitan regions, however, they jumped a whopping 14 percent.

Such upward momentum in regional prices far outstripped the 5.9 percent increase they saw in 2010 but continued a rapid climb that began in the aftermath of the 2008 financial crisis. This was triggered by a paucity of new housing, swollen demand for small living quarters and improved transportation infrastructure such as new tracks for KTX bullet trains.

But buyer sentiment now seems to be souring across the nation, and experts say the main reason is a prevailing sense of pessimism about the direction of the market.

“Real estate monitoring groups show that a negative future outlook has emerged as the most important reason why buyers have dried up in the real estate market, followed by current housing prices and inadequate resources,” said Kim Hyun-sup, a research fellow at Korea Development Institute.