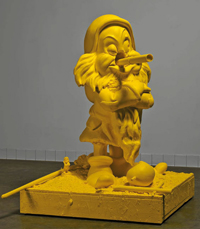 To May 12: This solo show by one of the world’s most controversial artists, Paul McCarthy, features his “Nine Dwarfs” sculptures.

The nine dwarfs are cast in silicone rubber, each of a strong, basic color. The pieces seem to be adapted from the cute, kid-friendly characters of Walt Disney’s animated film “Snow White and the Seven Dwarfs”(1937). But they’re not quite child-friendly and have been twisted into a very grotesque fairy tale.

The dwarfs have distorted shapes, with some parts seemingly crushed or broken and scattered on their pedestals, and appear phallic, arousing unease from viewers.

Put together, the nine dwarfs are part of the “White Snow” (not Snow White) series by the 67-year-old American artist.

Sex and politics have always fascinated the artist during his 40-year artistic career, and his portfolio clearly shows this. His works are related to questions about “the issue of equality and the position of the patriarchal male today,” the artist said during his visit to Seoul in early April.

Admission is free. The gallery is open Mondays to Saturdays from 10 a.m. to 6 p.m. and to 5 p.m on Sundays. 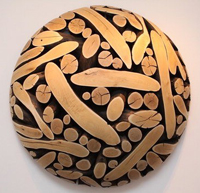 To May 27: The solo show of sculptor Lee Jae-hyo features his 300 works ranging from small sculptures made of scrap iron from Lee’s early days to his latest, large-scale installation works.

The latter works include a group of small stones that hang from the ceiling by wire, floating as if they were meant to form a bizarre tunnel in the air. The exhibits also include sculptures in various geometrical forms made of chopped wood chunks, which are in the signature style of the artist.

Some of the pieces, including a wooden sculpture that ambiguously resembles a table, stand on the border between sculptures and furniture. The artist, who has participated in not just art fairs or sculpture exhibitions but also design fairs and festivals, told reporters, “I don’t start my works with their utility in mind. Still, they can be used as furniture. The border between fine art and design is collapsing.”

Go to Gwanghwamun Station, line No. 5, exit 7, and walk for five minutes.