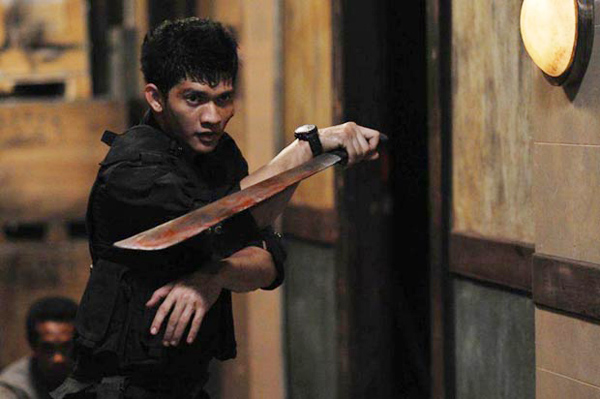 Ever the Asian cinema enthusiast, Evans gushed about the inspiration he derives from watching Korean films.

“I’m a huge fan of Korean cinema. One of the things I love about it is the rawness of the films .?.?. there is that edge to it,” he said during a press conference for his new film this week in Yongsan, central Seoul.

When the Korea JoongAng Daily asked Evans which Korean films he enjoyed in particular, a slew of Korean action-thriller titles rolled off his tongue in an instant.

“I’m a huge, huge fan of ‘Old Boy.’ The whole vengeance trilogy is incredible. I’m also a big fan of ‘The Chaser’ and ‘The Yellow Sea.’ ‘The Yellow Sea’ was probably one of the best films I saw last year - it was incredible,” he said.

“‘The Man from Nowhere’ with Won Bin - the final fight with the knife at the end is beautifully choreographed. It’s excellent.”

The director’s new project follows the success of his martial arts film “Merantau” (2009), also starring Uwais, which was a big hit in Indonesia and played in theaters worldwide.

This time around, the story centers on an elite police unit that raids a 15-story apartment building to find a vicious crime lord and his gang who inhabit the place. It’s a fist-clinching setup in the veins of action films like the “Die Hard” series and “[Rec]” (2007), in which its brute violence is balanced out with the beautiful fluidity of the silat-based action sequences.

In fact, the fight scenes with Uwais, who plays Rama, a rookie cop, and veteran martial artist Yayan Ruhian, who plays Mad Dog, one of the higher-ranking employees of the crime lord, almost feel like a bloody version of a ballet performance, with elegant yet sporadically explosive body movements.

With a low budget of around $1 million, Evans admits that the humble production setting took its toll on the film, mostly on the actors.

“The most memorable scene for me is the final fight. The final fight was six and a half minutes of nonstop hand-by-hand action. Usually if we were going to shoot that for a normal film, we’d have about 12 to 14 days but on this one, because the budget was so low, we only had eight days to get it in,” said Evans.

“That ended up being six consecutive days of Iko [Uwais] and Yayan [Ruhian] kicking and beating each other up all day.”

Uwais said that he suffered from a serious wound during filming but it was worth it for the outcome.

“An injury from one of the fight scenes turned black at one point. I didn’t think it was so bad at first but I had to go to the hospital for three weeks,” said Uwais, who was also in Seoul this week to promote the film.

“But I think these things are something that any actor will have endured for the film.” 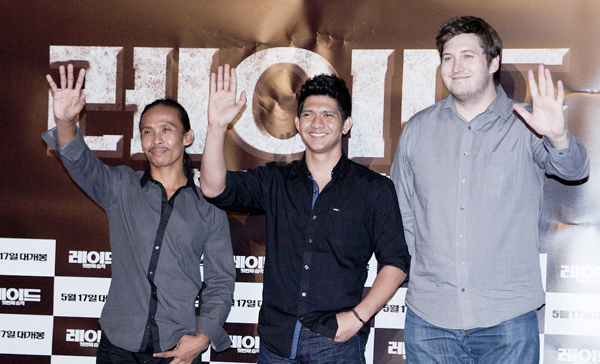 Addressing the raw, edgy action in the film, Evans said, “In traditional martial arts films ... the weapons can look too clean, whereas what I like are more rough things that are just at hand - machetes that were used and used or hammers which are very old.

“Blood instruments kind of create a feeling for the audience where they can respond to it more - they feel the hurt a lot more.”

After premiering last year at the Toronto International Film Festival, “The Raid: Redemption” has become one of the most critically praised action films from Asia, with the film doing well in both North American and Asian box offices.

With his impressive body of work including the thriller film “Footsteps” (2006) as well as the documentary “Land of Moving Shadows: The Mystic Arts of Indonesia, Pencak Silat” (2007), the young director has made a solid niche for himself in the film industry in introducing silat, incorporating the traditional martial arts genre to Western-influenced action/thriller genres.

“We had a very good reaction with our first feature movie ‘Miranda’ and we’re excited to see what the response will be like for this film because it’s very different and I feel like we’ve progressed in terms of the action we were able to execute in Indonesia,” the director said.