No flowers on this ‘Mother’s Day’ as DVD release nears

No flowers on this ‘Mother’s Day’ as DVD release nears 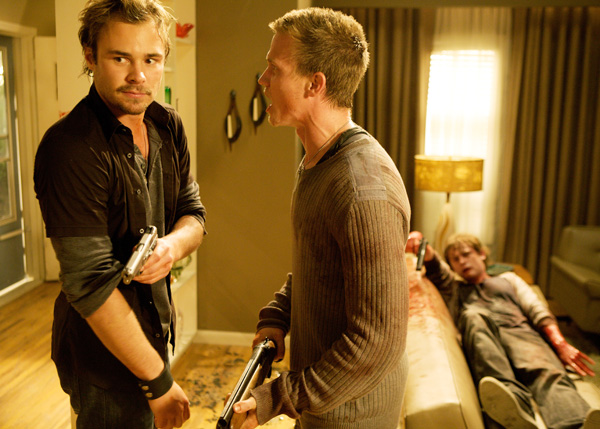 
“Mother’s Day,’’ inspired by the 1980 Troma slasher flick of the same name, is notable for a chilling lead performance from Rebecca De Mornay and not much else. And soon it will be available on DVD.

The home invasion thriller from director Darren Lynn Bousman (who made the second, third and fourth “Saw’’ movies as well as one of the worst films I’ve ever seen in my life, “Repo! The Genetic Opera’’) takes us through all the obligatory steps of the genre: Bad guys enter, assert their dominance and pick people off one by one. The hostages make futile attempts to attack or escape but their actions aren’t as important as the structure itself, which is meant to serve as a crucible of human nature.

That would be all well and good if the characters here were vaguely intriguing, but they’re not even cliched types - they’re just sort of bland, and eventually they’re bloody. That makes De Mornay’s quietly commanding, creepy turn stand out even more.

She stars as Mother, who steps in to clean things up when her idiot bank robber sons (Patrick Flueger, Warren Kole and Matt O’Leary) botch a job and then try to hide in what they believe is their childhood home. Turns out, Mother got foreclosed on and the place now belongs to Beth (Jaime King) and Daniel (Frank Grillo), who were in the middle of a housewarming party. Gnarly, sadistic torture ensues.

And that’s the point of these kinds of movies, right? To see how far they can push it and see how much we as an audience can stand to watch? Efforts to justify the characters’ motivations in “Mother’s Day’’ feel like clutter; the killers can just be depraved and the victims can just be clueless and that’s fine. Here, they all have back stories and secrets that prolong the running time and function as filler between the moments in which Mother sweetly, calmly calls the shots. She can serve up a chocolate cake with as much grace and ease as when she orders one of her kids to shoot someone. Sure, it’s a parody of the classically charming sociopath, but it’s riveting to watch.

Still, at some point, the action has to move outside the house. There’s only so much that can occur in this confined space. Eldest son Ike (Flueger) drives Beth to an ATM to drain all the cash from the hostages’ bank accounts, and here’s where “Mother’s Day’’ takes a turn tonally. There also happens to be a tornado coming, which seems unnecessary. Things are tumultuous enough indoors as it is. AP