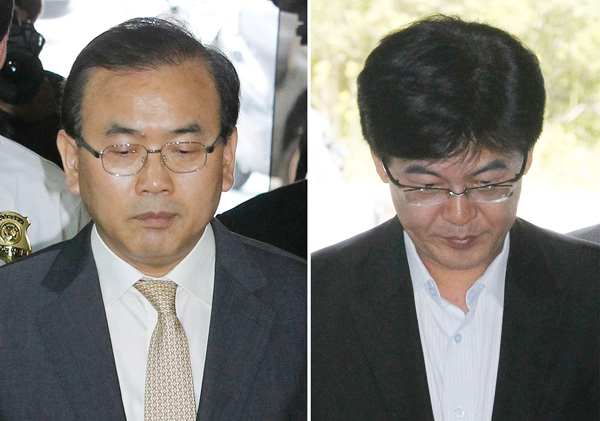 Prosecutors discovered a bank account suspected of having been used as a conduit for bribes received by a key presidential associate, Park Young-joon, a source involved in the probe into the “pi-city” scandal said.

Prosecutors said they are paying special attention to the withdrawal of 700 million won in 2008, shortly after Park purchased an apartment in Yongsan District, central Seoul. It is suspected that Park used his brother’s bank account to pay for his home.

Park, former vice minister of knowledge economy and a long-time aide to President Lee Myung-bak, has been facing accusations that he received a large sum of bribes from a real estate developer in return for using his influence to speed up the stalled “pi-city” project in southern Seoul.

The 52-year-old was accused of pressuring Seoul Metropolitan Government officials to expedite the construction approval process of the 2.4 trillion won development to build a logistics complex and a retail hub in Yangjae-dong, southern Seoul.

Discovery of the suspicious bank account came as the prosecution sought a pretrial detention warrant against Park.

“I will faithfully attend the hearing,” Park said on his way to the Seoul Central District Court.

Park faced an interrogation by the prosecution last week over the allegations that he had received at least 100 million won ($88,638) from Lee Jung-bae, the former developer of pi-city, in 2007.

A former senior official of the Seoul city government also appeared at the Seoul Central District Court to face a separate but related warrant hearing. Kang Cheol-won, former political affairs director of the Seoul Metropolitan Government, was accused of receiving some 30 million won from the pi-city developer.

“I have told the prosecution everything already,” Kang said. “I am sorry.”

Kang has admitted to receiving bribes in return for his influence to push forward the development project.

Park has been accused of introducing the lobbyist for pi-city to Kang.

The court was expected to review their cases and make decisions on pretrial detentions later in the evening.

Choi See-joong, a political mentor to President Lee and former head of the Korea Communications Commission, was already detained on April 30 on charges of receiving hefty bribes from the pi-city developer.