Ice queen takes to the classroom

Ice queen takes to the classroom 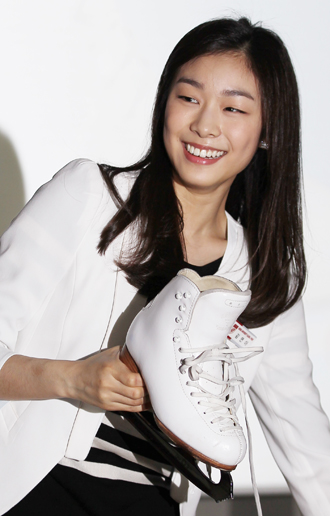 High school students are in for the gym class of their lives as Olympic figure skater Kim Yu-na has joined them as a teacher for four weeks.

In order to earn her degree in physical education from Korea University, Kim must complete a teaching practical, which she has elected to do at Jin-seon Girls’ High School in Gangnam District, southern Seoul.

Despite her obvious expertise, the skater turned up to class a bit nervous, just as any teacher would be on the first day. She spent time reviewing some theoretical background about figure skating and even brought in a pair of skates to demonstrate.

Media was kept out of the classroom for the duration of the lesson, but afterward Kim spoke with reporters.

“I was so nervous that I wasn’t able to perform to my optimum,” she said.

Kim is one of the most recognized faces in Korea, not only for her athletic prowess but also for her friendly demeanor.

Affectionately dubbed “The Nation’s Fairy” by fans, Kim set the record for the most number of product endorsements accrued by a celebrity back in 2009. At the time, she had signed 15 exclusive contracts.