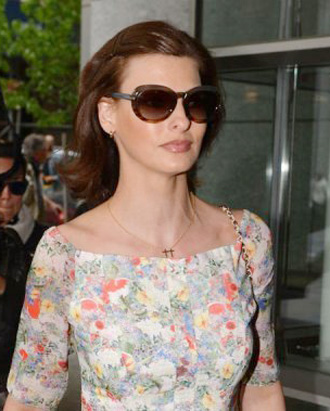 There was no word on how much Francois-Henri Pinault, 49, agreed to pay his ex to end the court case in New York, which had been due to go into its third day of testimony.

For his part, Pinault told AFP he was “very pleased.”

Evangelista, 46, wanted $46,000 a month for her boy, who she said needed a bodyguard, driver and 24-hour nanny, according to Pinault’s lawyers.

The amount was disputed by Beslow, although he did not provide an alternative figure.

The hearings in Manhattan Family Court featured Pinault, whose PPR conglomerate owns Gucci and Yves Saint Laurent, and the glamorous Evangelista, who turned up in designer sunglasses and Louboutin high heels.

The two had a brief relationship. Since 2009, Pinault has been married to actress Salma Hayek, with whom he has a four-year-old daughter, Valentina. He also has two other children from a previous marriage.

Evangelista was featured on some 600 magazine covers in her beauty career and said she was able to demand $100,000 fees for catwalk appearances.