Park arrested for bribes on ‘pi-city’

Park arrested for bribes on ‘pi-city’ 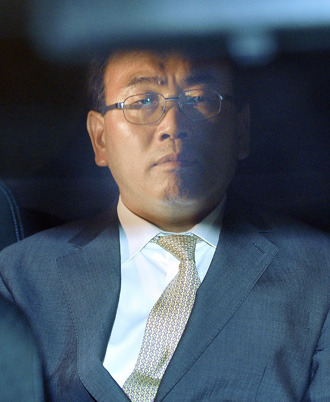 A former vice economic minister with close ties to President Lee Myung-bak was arrested Monday night on charges of taking about 100 million won ($88,000) in bribes to influence the awarding of a construction project five years ago, court and prosecution officials said.

Park Young-joon, 52, was detained after the Seoul Central District Court issued an arrest warrant for him following a day-long hearing and document review. The court accepted the argument by prosecutors that the suspect could destroy evidence if allowed to remain free.

“[Park’s] crimes have been ascertained and there is a reasonable concern that the suspect might flee and destroy evidence,” Lee Jung-seok, a judge at the district court said, after signing a warrant to arrest Park.

Park will undergo further questioning while under detention before going to trial. He has denied the charges against him.

Prosecutors suspect property developer Lee Jeong-bae paid at least 100 million won in bribes to Park between 2006 and 2007 to win a construction permit for a major trade center in southern Seoul.

The arrest comes a week after Choi See-joong, a former government communications regulator known as the president’s political mentor, was arrested on charges of taking bribes from the same developer.

The scandal is another blow to the president, whose image has been seriously tarnished by a series of corruption scandals involving his high-level aides. Lee’s single five-year term ends early next year and by law, he cannot seek reelection.

But the Seoul court refused to approve an arrest warrant for Kang Cheol-won, a former official with the Seoul Metropolitan Government, who has been questioned on suspicion of taking 30 million won in bribes in exchange for influence peddling in the construction project.