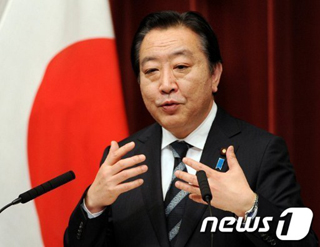 President Lee will depart for Beijing Saturday to attend a trilateral summit with his Chinese and Japanese counterparts, the Blue House said yesterday.

On the sidelines of the summit, Lee will have bilateral meetings with Chinese President Hu Jintao and Premier Wen Jiabao, as well as the Japanese leader.

During the Lee-Noda meeting, the Japanese leader has no plans to present measures to confront Japan’s colonial past and compensate the former sex slaves, often called “comfort women,” the Asahi Shimbun reported yesterday.

According to the newspaper, Tokyo originally planned to present the restitution plan at the upcoming summit, but failed to agree with Seoul on the specifics.

“The Japanese government has given up the plan of making an official offer because it could not figure out what Korea specifically wants at this point,” the newspaper said.

President Lee has pressured Japan strongly through a series of appeals to resolve the matter as soon as possible. In December last year, Lee raised the issue directly for the first time in a summit with Noda in Kyoto, Japan.

In his March 1st Independence Day address this year, Lee once again implored Japan, warning that time is running out for Tokyo to settle what Seoul sees as an urgent humanitarian need.

According to a diplomatic source, Noda made the decision to keep silent over the issue after his meeting with senior foreign affairs officials at the prime minister’s residence on Tuesday.

In September last year, the Korean government proposed to hold a bilateral meeting to address the issue, but the Japanese government has not responded.

A presidential aide told the Korea JoongAng Daily yesterday that the ball is in Tokyo’s court. “We’ve already made our position very clear. And Japan knows it,” he said. “What we want are measures that the victims can accept and agree with.”

The official also said Seoul never set a deadline, although there is a pressing need for Japan to resolve it as soon as possible because many elderly sex slavery victims have already died.

“If none is left, Japan will face an unimaginable moral burden,” he said.

Separately from the Lee-Noda summit, Lee will attend other meetings in Beijing. A trilateral summit between Lee, Wen and Noda is scheduled for Sunday, and the three leaders will discuss regional security and economic affairs.

A trilateral investment-guarantee agreement will be signed at the summit, as well as a joint declaration to explore the details of the meeting. Agreements on agricultural and forestry cooperation will also be signed.

Lee will meet bilaterally with Wen on Sunday and Hu on Monday.

North Korea issues will be a key topic in both bilateral and trilateral summits.

The annual trilateral summit is the fifth of its kind.