China shows its softer side during trip to iconic Xi'an

China shows its softer side during trip to iconic Xi'an

Daming Palace epitomizes the golden era brought to China by the Tang Dynasty. Provided by the China National Tourism Administration


China is often portrayed in Korea as a bigger and stronger bully when it comes to politics and history. Issues like Chinese fish piracy in Korean waters, more yellow dust from expanding Chinese deserts and China’s deportation of North Korean refugees to a brutal and near-certain death keep Sino-Korean relations in the spotlight, and not in the nice way.

Such problems won’t vanish on their own, but Chinese officials are betting that in at least one way, they can change the way they are regarded among Koreans: increased cultural exchanges between our citizens and theirs.

It was on a trip organized by the China National Tourism Administration that I found myself in the city of Xi’an in March, along with other Korean journalists invited to mark the 20th anniversary of modern diplomatic relations between China and Korea.

As I arrived in the city, I was pleasantly surprised by the sightseeing opportunities. After admiring the imposing architecture and diverse history, I had quite little time to do anything else, even to think about the newspaper article I read on the way over about those filching Chinese fishermen. 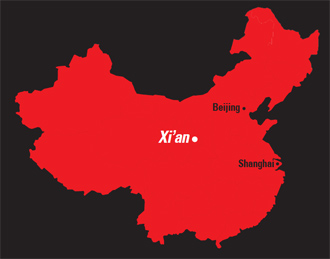 Located far inland in northwestern China, Xi’an previously served as the capital of as many as 13 Chinese dynasties. That history has made the city a treasure trove of cultural relics from different eras, including the famous Terracotta Army of Qin Shi Huang, the first emperor of a unified China who lived from 259 to 210 BC.

Ever more impressive than the world-famous soldiers, though, was the vast mark left on the region by the Tang Dynasty, which lasted from 618 to 907.

Tang was a golden age when China matured politically, economically and culturally. During that period, Xi’an, then called Chang’an, became the first city in the world to house more than one million people. Its prosperity was possible due to the Silk Road, a trade route through which the dynasty interacted with central and southern Asia, the Middle East, Europe and even Africa.

A Tang relic that epitomizes the glory of the period is the Daming Palace, located northeast of Xi’an. The royal palace was built by Emperor Li Shimin on a 3.7-square-kilometer (914-acre) plot of land, several times bigger than the Forbidden City in Beijing.

It burned down during civil unrest 200 years later, and what is left has been restored by the Chinese government over the last half century since 1957. The restored areas were opened to the public in October 2010, and it usually takes half a day to get around, even with electric carts.

The enormous exhibit is obviously a point of pride for local residents and government officials alike. Yao Yuan, 26, whom I met at the entrance of the Archeology Discovery Center at the palace, said that he had been working there for a year since graduating from a college in Xi’an. A history major, his excitement about working at a cultural site that represents his country was immediately evident.

Inside, the extent of the restoration and modernization efforts became even more apparent as we were greeted by an enormous IMAX cinema and a 3-D film titled “Legend of Daming Palace.”


The 40-minute-long piece was a romantic story between a princess of Wu Zetian, the only empress in Tang Dynasty, and a prince of Persia, who came to pay tribute. After a fierce tournament competing against his Chinese rival, the prince brought the princess back to his home country.

The intense story line shows how natural such international exchange and competition was for the people of the Tang Dynasty, which had emerged as a melting pot of different cultures and an unquestionable force in the regions connected by the Silk Road.

A museum annexed to Xi’an’s Famen Temple, where we visited on the third day, also showcased many Tang-era relics and touted a similar internationalism.

“Tang, the most magnificent chapter of Chinese history, is known for its all-embracing attitude of foreign cultures .?.?. and its display of modesty and flexibility in absorbing from the outside world,” read the entrance sign.

Buddhism itself was by far the most prominent “foreign import” on display, and the Famen Temple, built during the Northern Zhou Dynasty, had its most enthusiastic royal patrons during the Tang period, according to records.

Located about 100 kilometers (62 miles) northwest of Xi’an, the temple has a 47-meter-tall great tower enshrining the holy Finger Sarira, the finger bone relic of the founder of Buddhism.

The road leading to the main sanctuary is so long that it feels like a runway, but still, many worshipers, including Yan Di, a manufacturing worker from Xi’an, dotted the path. Yan said she took a day off to come and pray for the wellbeing of her family.

About 80 percent of Chinese identify as Buddhists, according to an official working at the temple.

The religion’s large following was another major theme highlighted during our trip, especially at our first stop, Dayan Tower, which is also known as the Big Goose Pagoda.

Xuanzang, a famous Tang monk credited for converting China’s prodigious Buddhist following, got a lot of attention at this site.

From left: The Terracotta Warriors and Horses Museum features thousands of terracotta sculptures discovered in the 1970s. Provided by the China National Tourism Administration. A Buddhist statue lining the road to the main sanctuary of the Famen Temple By Moon Gwang-lip


A number of Tripitaka scriptures brought from India via the Silk Road are housed in the tower, which is as impressive outside as it is indoors.Standing at 64 meters, it is a major landmark that can be seen from almost every section in the city.

Our fast-paced excursion wasn’t limited to those major sites, with our handlers incredibly eager to squeeze as much into our schedule as possible. It’s not a secret why: Around 11 percent of the city’s gross domestic product derives from the tourism industry, according to the official in charge of Xi’an’s cultural affairs, who is surnamed Shao.

The ensuing visits to the Forest of Stone Tablets, a collection of famous tablets from all across China, and Mount Hua, a beautiful mountain located east of Xi’an, demonstrated just how residents are able to attract so many money-spending visitors.

Other interesting attractions not on our schedule included 100 mausoleums lying in undeveloped areas in the city and surrounding areas.

So far, the vast majority of tourists to Xi’an come from other places in China, but Shao said there are efforts in the works to attract more visitors from all around the world. Tourism promotion officials are targeting India and Eastern Europe, among other locations.

Korea and Japan are priorities for China as well. A ceremony launching a tourism promotion took place on the first day of our visit at the 13.7-kilometer-long wall that surrounds the city. It was timed to coincide with the 20th anniversary of Korean ties as well as the 40th anniversary of Sino-Japanese diplomatic relations.

Before dozens of Korean and Japanese tourists visiting on the program’s first trip, Dong Xianmin, a director at the Shaanxi Province branch of the China National Tourism Administration, recited a famous Confucian proverb.

“Is it not delightful to have friends coming from distant quarters? I hope the friendship between our three countries will be forever,” Dong said, drawing applause from the crowd.

The diplomatic points of contention that China has with many other countries in the world, including Korea, cannot be swept under the rug or waxed over with ritzy PR. Yet a focus on the history of impressive cities like Xi’an and personal connections with the everyday people who dwell in them - and are clearly proud of their nation - could play a part in shifting the world’s perception.

If the scene from the opening ceremony is any indication, such a strategy shows potential.