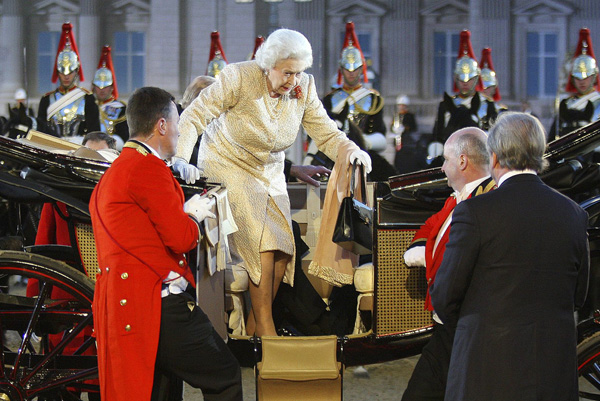 WINDSOR, United Kingdom - Britain’s Queen Elizabeth watched a glittering pageant Sunday of hundreds of horses and over 1,000 performers from around the world, the first big celebration for her diamond jubilee.

On the show’s final night, after three other performances attended by royals, the queen and her husband Prince Philip watched a special version with stars including singer Susan Boyle and Australian entertainer Rolf Harris.

The equine pageant is close to the queen’s heart: she was given her first pony at age four and remains a keen rider, as well as an owner and breeder of racehorses.

In tribute to the queen’s more than 250 Commonwealth and state visits, some 550 horses and 1,200 performers from 17 countries performed against the backdrop of a 45-meter (148-foot) replica of Buckingham Palace.

Troupes from India’s Dancing Marwaris to the Chilean Huasos displayed their mettle in a rare gathering of global horsemanship to mark the monarch’s 60 years on the throne.

Italy’s Carousel of the Carabinieri re-enacted an 1848 battle in a whirl of feathers and swords before riders from Russia’s Kremlin Riding School formed a human pyramid on galloping mounts in a daredevil show of horseback acrobatics.

Between horseback performances were bursts of song and dance, among them a didgeridoo performance, a Maori haka, Inuit throat-singers and a mariachi band.

Scottish singer Boyle, 51, who shot to fame in 2009 through a TV talent show, sang Paul McCartney’s hit “Mull of Kintyre.” The 86-year-old queen’s own racehorses staged a mock race, too.