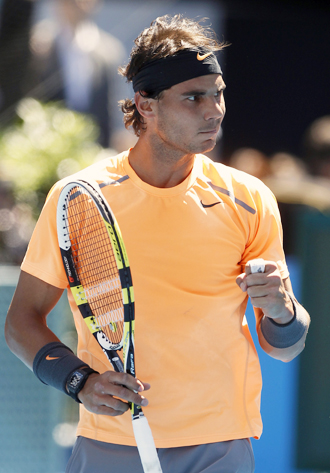 ROME - Rafael Nadal’s chances of winning an open era record seventh French Open title next month will not be affected by his fall to number three in the world rankings, the Spaniard said on Monday.

His third-round defeat last week in Madrid meant he was overtaken by tournament winner Roger Federer, with Novak Djokovic still top of the pile.

“Being number two or number three isn’t going to change my goal,” Nadal told a news conference at the Foro Italico, the long-time home of the Rome Masters, which began on Sunday.

“My goal will be the same, number two, three or number 10. To win you have to beat the best players in the world. The only change is in the semi-finals but it doesn’t make any difference.”

Nadal could regain second spot from Federer this week but said he was more concerned with the way he is playing.

“I will try my best to play my best and if I am able to do that I will have my chances to have a good result,” he said.

“I will just try to play the same way I did in Monte Carlo and Barcelona [where he won the title]. The feeling is there and I am happy with how I am playing.”

Nadal and Djokovic were the most vocal critics of the slippery nature of the blue clay which was used in Madrid for the first time last week.

“I don’t think about Madrid,” Nadal said. “I lost [to Fernando Verdasco]. I accept that I played bad and I lost because I didn’t play the level that I needed to win.

“But Rome is a tournament I love, one of my favorite tournaments of the year. I am just excited and motivated to come back here.”

Beaten in the final by Djokovic last year, Nadal is due to begin his title bid on Wednesday against Florian Mayer, a German with an awkward game who beat him when they played in Shanghai last October.