SPL title under his belt, Celtic’s Ki looks ahead

SPL title under his belt, Celtic’s Ki looks ahead 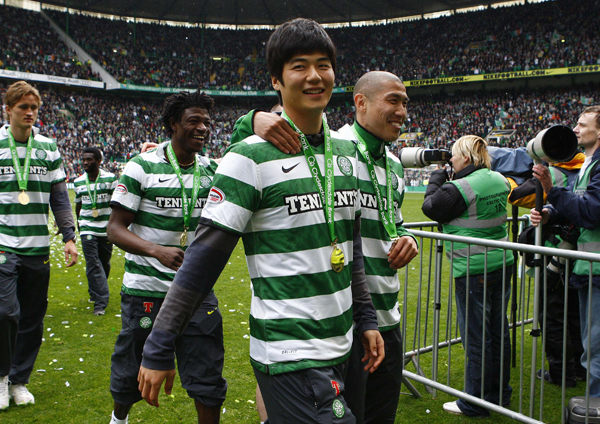 
For Celtic FC midfielder Ki Sung-yueng, the 2011-2012 season turned out to be a successful one, with his club clinching its first Scottish Premier League title in four years. The 23-year-old played pivotal role in the center of the pitch for the Glasgow club, scoring six goals with six assists in his 30 appearances in the league, although he did miss some games towards the end due to injury.

Ki has 18 months left on his contract with Celtic, but there have been rumors that he is wanted by other clubs. In January, Celtic manager Neil Lennon previously said that the Korean is worth 10 million pounds ($16 million), indicating Ki’s strong status with the club. But which jersey he wears at the start of next season is already drawing much speculation.

For Korean football fans, Ki’s performance overseas was welcome news. Many are expecting he will play a major role in the national football team’s final round of Asian qualifiers for the 2014 World Cup next month.

Ki has so far played 45 matches for Korea and netted five goals.

The former FC Seoul player hasn’t featured much with the Olympic football team as he has mainly played with the senior team. But Ki is also considered a pivotal player in the Under-23 team’s London run.

On Tuesday, Ki returned to Korea and talked with local reporters at Incheon International Airport about his future and international duties. He is currently recovering from a hamstring injury which he suffered during the match against Motherwell FC on April 22, but the midfielder was confident that he can help the Taeguk Warriors.

Q. How do you feel after winning the Scottish Premier League?

A. It was unfamiliar to me since it was my first time winning the league. But I felt proud of it and it was a good experience. I was especially happy for Celtic and all its fans and players. Next year, our goal is to reach the UEFA Champions League group stage. We did our best in the Europa League, but felt a little bad about the result this season - next season we want to show good form in the Champions League.

There are rumors that you are moving to the so-called “big leagues.”

I heard that last year. Since the season is now over, it’s about time to think deeply about my future. First, I need to take a rest since I’m tired both physically and mentally. I know I don’t have much time left to play in Europe. I will need to make my decision very carefully.

What are the conditions you are looking for if you are willing to move to another club?

It has to be a team that I can play for. If I can play on the pitch, it doesn’t matter which league it is. I think I’ve grown up after playing in the SPL. Even if it’s not a “big league,” if I can just play, I will be able to develop myself more and get more good experiences.

How much do you think your transfer fees will be if you are transferred to another club?

My team will evaluate my value. Personally, I don’t think I’m a 10 million pound player. But if I had to move, I think it would be better to have a high transfer fee.

Did teammate and national team veteran Cha Du-ri help you a lot this season?

Du-ri really helped me a lot and I depended on him a lot as well. He told me what he experienced in Europe and I was able to mature. I know his contract has ended and I’m not sure what will happen with him, but if he leaves, it will be really bad for me.

Have you thought of playing with the Bolton Wanderers’ Lee Chung-yong on the same club?

Certainly that would be a happy thought. I know him from the past and he is a good friend. If we can play on the same team, it would be a big boost for me. I don’t know if he’ll move, but since he has been doing well the past two seasons, I think he will perform well wherever he goes.

What do you think about the final round of Asian qualifiers for the World Cup?

Four years ago, I made my international debut during the final round of Asian qualifiers for the World Cup. It has been four years and still the qualifiers are not an easy stage. However, we should not be afraid because it all depends on how much we prepare.

You don’t seem to closely interact with the Olympic team and coach Hong Myung-bo. What do you think?

It felt bad for me because I had chances to play with coach Hong, but couldn’t manage to do so. However, if I get picked up to the Olympic team, I will prepare thoroughly.