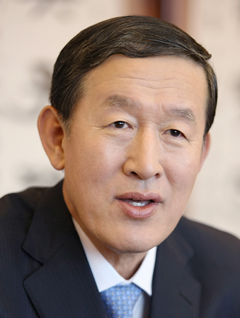 GS Group Chairman Huh Chang-so urged his executives to spend more time on site at manufacturing facilities to make the group a leading world player at a forum yesterday.

Huh met with the 400 heads and executives of the group’s subsidiaries at the third annual “GS Value Creation Forum” held at its headquarters in Yeoksam, southern Seoul.

“Workers and site managers are the engine powering GS Group,” he said. “Unless people work to improve areas that are considered weak points, we will never grow to become a top-tier global player.”

He encouraged plant workers to accumulate more on-site experience to improve performance, adding that many GS employees had risen up the ranks this way, including him. Huh joined the company in 1977 and worked at a number of foreign sites including ones in Hong Kong and Tokyo.

After executives and other staff at GS Retail, GS Construction other subsidiaries gave presentations on how they have managed to cut costs upgrade the quality of their services and products, Huh said he was delighted at the wealth of new project ideas.

“It is significant that we have more ideas in the tech sector this year,” he said. “Some projects show results only after years of effort, so it is important to continue to be passionate and fight to get a result.”