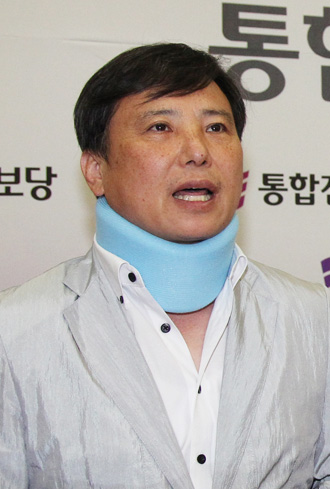 Wearing a neck brace, Cho Joon-ho made introductory remarks on May 14 at a party leaders’ meeting held in the National Assembly. [YONHAP]


In the middle of the Central Steering Committee conference of the opposition Unified Progressive Party last Saturday at Ilsan Kintex in Goyang, Gyeonggi, about 200 members of the party’s largest faction surrounded the three co-chairs and yelled “Cho Joon-ho apologizes to the nation!” and “Stop this illegal conference!”

Water bottles and disposable cups flew onto the platform and the most aggressive and angry protestors managed to physically reach the co-chairs.

Their main target was Cho Joon-ho, who was responsible for an internal investigation that discovered the party’s primary to choose proportional representatives was rigged.

Cho’s hair was pulled and a rain of punches struck him in his neck, arms and legs, attacks captured by news photographers. Sunday’s papers were filled with pictures of Cho’s pain-contorted face.

On Monday, when the party announced that the 14 proportional candidates elected in the primary should forfeit their candidacies, Cho wore a blue neck brace.

Yesterday, Cho was required to have surgery to recover from Saturday’s attack.

The deeply divided UPP said in a press release early yesterday morning that Cho would receive cervical spine surgery on his injured neck.

“The discs in Cho’s spine have been squeezed in the last few days,” a spokesman of the UPP told the JoongAng Ilbo. “Cho’s doctor suggested the surgery as soon as possible because additional shocks could paralyze his entire body.”

The UPP said the operation went for three hours from 10:30 a.m. and it was successfully completed at a hospital in Yeongdeungpo District, southwestern Seoul. 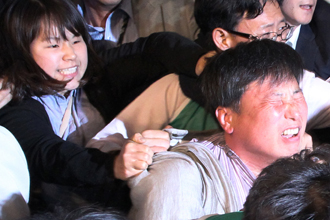 An unidentified woman from the largest faction in the UPP stormed onto a podium and grabbed Cho Joon-ho, a co-chair of the party who led an internal probe into the UPP’s rigged primary, by the hair and jacket on May 12 when the three co-chairs were presiding over the central steering committee at Ilsan Kintex in Goyang, Gyeonggi. Members of the pro-North Korea faction disrupted the proceedings to decide whether 14 proportional representative candidates should forfeit their candidacies. While Rhyu Si-min and Sim Sang-jeong, the other two co-chairs, sustained minor injuries, Cho was severely injured by the attackers. By Cho Yong-chul

The UPP said that Cho will still need outpatient treatment and a full recovery is not guaranteed.

After media reported Cho’s surgery, criticism of the aggressive, pro-North Korean faction of the party, the Gyeonggi Dongbu Allliance, rose among other UPP members.

Messages were posted on the UPP Web site reading, “Are they really part of us?” and “I can’t believe that they don’t even make a small apology! Are they animals or humans?”

“The violent brawl that happened on Saturday has engraved an indelible scar on laborers’ hearts,” said Kim Young-hoon, chairman of the Korean Confederation of Trade Unions during a radio program aired recently. “No progressive political leader in the world was assaulted like Cho in the history of politics.”

The KCTU will decide whether to withdraw its support for the UPP and tell their union members to defect from the party at an executive meeting today.

Cho joined the opposition UPP in February to become a representative of the working class and was selected as one of the four co-chairs.

Cho was a member of a labor union of Kia Motor and later became chairman of the Korean Confederation of Trade Unions.
By Ryu Jung-hwa, Kwon Sang-soo[sakwon80@joongang.co.kr]