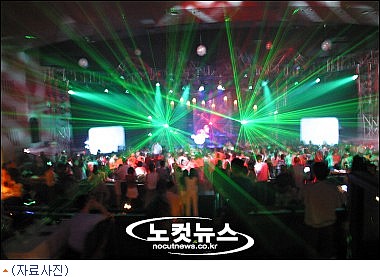 Police made arrests of owners of 24 bars and clubs in Seoul and Gyeonggi who ripped off customers after luring them in with attractive women.

The Gangseo Police Precinct in western Seoul said yesterday that they arrested 22, including a 28-year-old bar owner surnamed Kang who masterminded the scheme.

The police also filed a warrant to detain Kang on the same day and also booked 21 accomplices, including a 37-year-old night club owner surnamed Park and the women involved without detention on charges of fraud. The police put two other missing suspects on the wanted list.

The police said that Kang opened a bar in Janghang-dong in Ilsan, Gyeonggi in April last year and hired attractive females, including college students, to attract male customers when his business started to falter.

Kang then sent the women to well-known “booking” night clubs such as the Gukilgwan club in Jongno District, central Seoul. Kang cooperated with waiters and owners of the night clubs, asking the waiters to arrange meetings between his women and customers.

The women then encouraged the men to drink more outside the city, and led them to Kang’s bar. Once they sat down, the ladies ordered expensive whiskey and disappeared when the customers were intoxicated.

Kang educated the women, “Avoid men such as doctors who are intelligent,” and “Pretend to worry about customers when they look like they’re surprised by the price. It would hurt their pride and eventually lead them to pay money.”

Kang then charged 3 million ($2,572) to 3.7 million won for bottle service. Typically a bottle of liquor and side dishes would cost about one million won at a similar establishment. The police said that the women were motivated to work because they were promised 40 percent of each table’s profits.

The police said that Kang earned 53 million won in fraudulent profits on 50 different occasions in the past year. The police were able to track down the suspects as one of the victims surnamed Song, 36, called the police after being extorted 4.1 million won from Kang. Song told the police that workers tied his hands with a rope and threatened to cut off his fingers if he didn’t pay.

“We’re going to expand the investigation because we judge that there are more victims,” a spokesman for the Gangseo Police Precint said.