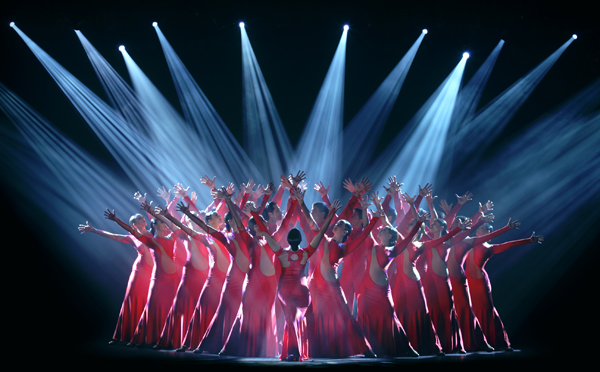 Carmen Mota’s new show, “Alma,” fuses flamenco’s traditional staccato style with influences of a flamboyant Las Vegas or Broadway performance. “Alma” comes to Seoul for the first stop of its world tour from Wednesday to 26 at the LG Arts Center. Provided by the organizer


The legendary Carmen Mota’s new performance “Alma,” meaning “soul” in Spanish, isn’t your typical flamenco show. After heating up the venue in Seoul with “El Fuego” three years ago, the 79-year-old queen of the Spanish dance said she will once again captivate Korean audiences with a performance that displays the “souls of all artists involved.”

“Alma” can be described as a fusion of the traditional staccato style with a flamboyant Las Vegas-esque performance.

“For ‘Alma,’ we have tried to continue in the same line as ‘Fuego’ but renewing, improving and keeping on our personal research within the Spanish dance,” Mota said in a statement.

“We are going to bring a completely revised show, comprised of innovative and fresh scenes, to which we have devoted all our efforts, work, spirit and soul trying to provoke the same feelings of passion and the same impact on the audience that we achieved with our former show, ‘Fuego.’?”

Mota added that the modernization of flamenco while maintaining its traditional roots is what she had been trying to accomplish with “Alma.”

“My concept of flamenco is not only based on the tradition, sticking to the roots, but also approaches the big productions, following the notion of the musicals from Las Vegas or Broadway,” she said.

“The show tries to maintain the heredity, the original sense of the Spanish dance, but at the same time adds the touches of magnificence from big shows.”

The second part was entirely choreographed by Joaquin Marcelo, Mota’s deaf son who lost his hearing at the age of eight after suffering from viral meningitis. Marcelo said his hearing disability actually helps him create dynamic and spectacular dances.

“I used to and still do focus most of my attention on feeling the vibrations from the stage,” Marcelo said in an interview with the organizer. “That’s how I understand the melody of the music. But now, I try to concentrate more on the visual perception so I don’t restrict my dance in the rhythm.

“It is hard to imagine flamenco created from silence, but I believe that is when the passion becomes the celestial dance.”

Although it was difficult at first to accept Marcelo’s passion of becoming a flamenco dancer, Mota said she now is “more than confident to present his creations within my shows,” as he is a “highly sensitive person with a special talent for the arts and a choreographer with innovative ideas that don’t sacrifice the touch of purest flamenco foots within his search of new tendencies for the Spanish dance.”

Marcelo’s parents were both flamenco dancers. Mota said she began dancing at the age of 3.

“Every time I heard music around, I went directly to the music source and started to dance,” she said. “My mother always had to come and take me out from a circle of people. And flamenco was always the kind of dance that inspired me the most.

“Flamenco is a cultural expression through a specific sound, popular lyrics and body movements.

It is not only an art but also a way of understanding life. It is temperament and heart - the deep feelings in everything you do.”

As a flamenco guru, Mota’s name itself became another expression for passionate extravaganza, according to the press release.

Mota’s “Alma” was presented in Spain and hasn’t yet been performed elsewhere in the world. Korea is the first stop of its world tour.

According to Mota, her dance company has a special bond with Korea.

“Korea is one of the few countries we have toured that formed a special bond. The strong emotions of the Korean audience tend to connect easily to the Spanish expression,” she said.

“We have also experienced a highly warm response from Korean audiences. They transmitted a lot we could use every time we came to perform ‘Fuego’ on Korean stages. They even became wild in their applause and made us feel praised and acclaimed. We will never forget those moments.”