Rhyu finds himself at odds with UPP actions

Rhyu finds himself at odds with UPP actions 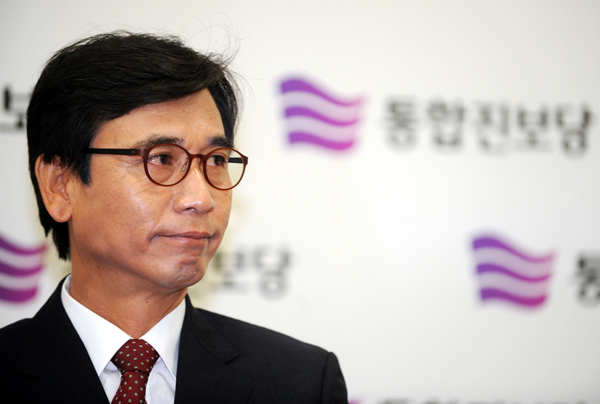 
Last week, when news spread both online and offline that members of the minor opposition Unified Progressive Party (UPP) had refused to sing the national anthem before starting the party’s formal meetings, Rhyu Si-min, former co-chair of the liberal coalition, raised more than a few questions.

“Maybe it’s because I’m new to this party, but there are a lot of things that are difficult to understand,” Rhyu told reporters during a break at the steering committee meeting last Thursday.

Rhyu, of the People’s Participatory Party, became the co-chair of the party after the coalition was formed last December from the merger of the union-backed Democratic Labor Party, the PPP and the New Progressive Party. Rhyu has served as health and welfare minister under the Roh Moo-hyun government.

Rhyu was also referring to the many protocol procedures that the largest pro-North Korea faction of the UPP - mostly student activists in their younger days - usually skip.

For example, the process of holding a legislative meeting involves a party discussing the proposed bill handed in advance. If a proposed amendment has also been submitted beforehand, they debate that as well.

But last week, when the UPP held its own steering committee meeting, the party introduced bills and lawmakers proposed amendments on the spot. The meeting that day went on for nine long hours and no significant bills passed the committee meeting.

Rhyu pointed out that “it’s a general rule that lawmakers submit a motion of amendments before the meeting takes place but because [mainstream members of the UPP] propose and amend bills unplanned, the meeting takes long hours and is inefficient.”

The UPP’s method of counting votes is also unique: its steering committee members count votes by the number of hands raised by lawmakers. This method is also how university student councils count their votes.

Other non-mainstream members of the UPP have also shared the “culture shock” they have experienced after the three liberal parties’ merger.

“The major difference between the mainstream UPP and other parties is that the secretary general has powerful authority,” said a non-mainstream member of the UPP. “There were often times when [former] secretary general Jang Won-seob rejected the party’s co-chairs’ orders.”

When Rhyu proposed to Jang that the party sing the national anthem before its official launch to appeal to people, Jang rejected the proposal. Other two co-chairs of the UPP - Shim Sang-jeong and Lee Jung-hee - had accepted Rhyu’s proposal.

The anonymous member also added that “the secretary general of the UPP not only controls the party but also other left-wing organizations like the Korean Confederation of Trade Unions and the Korean University Student Association.”

The member also said that “the party is closely linked to outside institutions and at the top of the political tower is the Gyeonggi Dongbu Alliance [who were student activists hailing North Korea’s juche, or self-reliance, ideology in the 1970s and 1980s].”