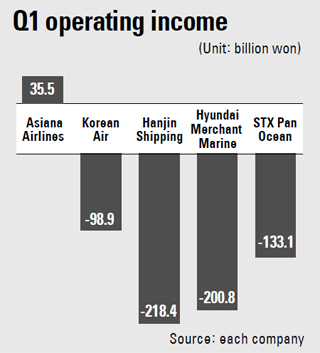 The high price of oil has taken its toll on airlines and shipping companies, with Asiana Airlines announcing yesterday that its first-quarter profit plunged 94.7 percent from a year ago to 3.3 billion won ($2.8 million), while its operating profit dropped 52.7 percent to 35.5 billion won.

Asiana, the country’s second-biggest airline, said its fuel costs jumped 26 percent from a year ago and its operating cost climbed 11.4 percent.

Its sales rose 7.6 percent to 1.4 trillion won due to an increase in domestic and foreign passengers, while its cargo operations fared well as a reflection of stable shipments to Europe and the United States.

But high oil prices caused it to withdraw plans for more gas-guzzling, long-haul flights, and it recently scrapped its idea to add more flights from Incheon to Seattle and Chicago. It originally intended to increase to seven the number of weekly flights to the two U.S. cities.

Every $1 increase in the price of crude oil costs the airline an additional 1.2-million won for a one-way flight between Incheon and Los Angeles on one of its fleet of B747-400s, it said. The same oil hike would add 200,000 won to the Incheon-Narita route, it added.

Korean Air also dipped into the red in the first quarter, with losses reaching 98.9 billion won.

Korean Air said its performance will improve in Q2.

“Demand is expected to grow in concert with global economic recovery, and the cargo market is likely to boom later this year because of factors including the London Olympic Games and the recently implemented Korea-U.S. FTA,” Korean Air said.

The shipping industry has also suffered from this, coupled with a drop in demand. STX Pan Ocean, Hyundai Merchant Marine and Hanjin Shipping all recorded bigger-than-expected losses in the first three months.

Hanjin posted an operating loss of 218.4 billion won on sales of 2.3 trillion won - a considerable deficit considering that its loss for the whole of 2011 was just over double this figure. However, while profits were compromised by higher fuel outlays and sagging demand, it still saw sales improve 7.4 percent from Q1 2011.

Hanjin and Hyundai hope to see a turnaround in the second quarter after raising rates to give their container shipping businesses a boost.