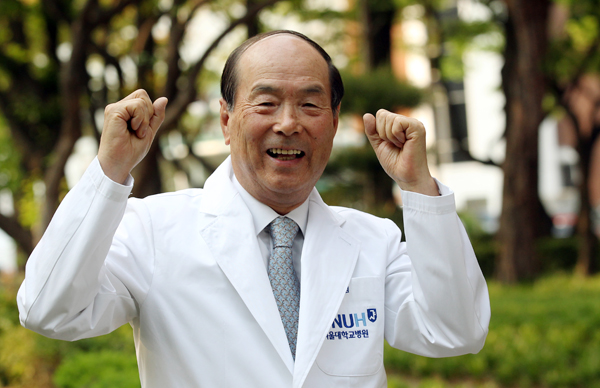 His medical achievements in angiography and intervention radiology - a way of treating cancer and blood vessel-related diseases using ultra sounds and CT scans instead of surgery - have found him a place in the history books. In the 1980s, when there were not enough teaching materials for anatomy students, he took a power saw and two dead bodies to his lab. A book featuring scans of those bodies was recently published in the United States.

But as superhuman as a well-accomplished doctor like Han might seem, none of those items listed on his resume mattered when he was diagnosed with terminal cancer in 1998.

Han said that hearing his diagnosis was only the third major crisis in his life - after losing his parents during childhood and the Korean War.

During a health checkup, doctors discovered a large tumor with a diameter of 14 centimeters (5.5 inches) inside his liver. Though rightfully concerned, Han remained calm and simply told his family to reserve a room in the hospital. He went through surgery thinking, “I might only have three years left.”

At first, it was thought that the surgery was successful. But two months later, there was seriously bad news. The cancer tumor had spread to lungs on both sides. It was almost a foregone conclusion that death was imminent.

“I really am going to die this time,” Han despaired. “I have less than six months left.”

All kinds of thoughts came to his mind, including his wife, but he quickly put his worries aside and focused on chemotherapy. A miracle happened, and after six weeks of therapy, the tumor shrank. There was hope. He started eating with all his strength, and the cancer cell disappeared.

The fight for cancer, however, continued. In July 2006, he was diagnosed with bladder cancer. In November of the same year, doctors discovered a small tumor in Han’s lung. He fought them all and now has regular health checkups every six months.

Though he spent much of his career researching and implementing up-and-coming medical technologies, Han notes that it wasn’t just medical science that got him through his several bouts of cancer. The doctor has long been a critic of societal prejudices that only geniuses can become doctors. Other qualities besides capacity for pure scientific thought are also important, he argues.

“An important qualification to become a pediatrician is to love children even if they cry and poop,” he said. “Likewise, an important quality for any doctor is humanity before intelligence.”

Even Han’s health cannot be purely measured by scientific values and theories, he said.

Han avoided heavy drinking, but drank three times a week. He also smoked cigarettes for over 30 years, rarely exercised and usually got home from work after 11 p.m. He was also diagnosed with hepatitis in 1968 while in the United States.

Still, despite all these factors, he was able to overcome cancer on multiple occasions. Han says he doesn’t know what the secret to his success has been, and that there is no one secret ingredient to having a resilient body.

He does advise thinking of cancer as a friend in a book he published called “Do Not Fight Cancer. Make It Your Friend.”

“Cancer is like a sinkhole that draws you in deeper as you try to get away. Admit your diagnosis, make it your friend, appease it and get it to go away slowly,” he advises in the book.

He also recommends choosing a doctor as if choosing a spouse, and asking local hospitals for important information.

His wife Kim Bong-ae also had another kind of treatment for her husband in mind while he was ill: special foods that support a healthy immune system and fight disease. During her husband’s chemotherapy, she spent a significant amount of time researching such cuisine.

For that effort, Han has sincerely thanked his wife and he does attribute some of his health to his eating habits.

He often has a half plate of cabbage and lettuce, a half a slice of a tomato, a banana and an apple, 10 boiled ginkgo nuts, pumpkin rice porridge, boiled eggs and a cup of milk for breakfast.

And something has to be working well. Other than medicine for high blood pressure, Han has not taken any since fighting off his cancer.