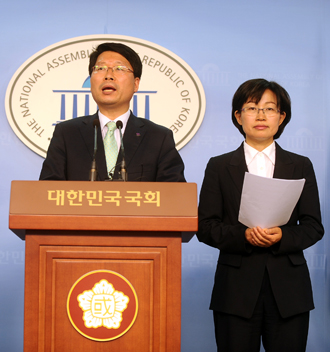 Lawmaker-elect Oh Byeong-yun of the UPP holds a press conference yesterday at the National Assembly to announce the launch of a separate emergency council created by the largest faction in the party. Oh will chair the emergency council and Representative Kim Mi-hee, right, will be spokeswoman for the council. [NEWSIS]

The largest faction of a minority opposition Unified Progressive Party appointed its own leadership to compete with the leadership appointed last weekend.

This is the first time a political party has two competing interim leaderships in Korea.

The party’s largest faction, the so-called Gyeonggi Dongbu Alliance, yesterday announced it had formed its own emergency council, protesting a probe by a smaller faction that said the March primary for proportional representatives to the National Assembly had been rigged in favor of candidates from the alliance.

“The fabricated investigation [on the primary rigging scandal] should be discarded,” said lawmaker-elect Oh Byeong-yun, who chairs the new emergency council, at a press briefing yesterday. “We will put all our efforts into restoring the party’s dignity and clearing party members of false charges.”

The party’s former leadership stepped down to take responsibility for the rigged primary. An emergency leadership appointed by the smaller faction has called for the proportional representative candidates forfeit their positions. It said it will expel 14 proportional candidates who were elected in the primary, including three candidates who won Assembly seats, unless they resign by today.

Lee was a hardline pro-North student activist during the democratization movement of the 1970s and ’80s and is known as a de facto leader of the faction. Lee insists the party’s internal probe wasn’t reliable and has demanded a party-wide vote to determine whether the proportional candidates should step down.

He said in a recent interview with local media that only a small portion of the primary votes were dubious and that online voting, which counted for 90 percent of the entire votes, wasn’t manipulated.

“Interim leader Kang met with Lee on Friday evening and had a conversation for three hours, but they only found they have different opinions of the current situation,” Lee Jeong-mi, spokeswoman of the UPP’s official emergency council, said at a briefing. “We didn’t hear any intention of resignation [from Lee].”

However, expelling members won’t be easy for the interim leadership. Under the party’s internal rules, if the leadership wants to expel a party member, a regional chapter that the member belongs to should approve it first. Kim and Lee recently moved from the party’s Seoul regional chapter to the Gyeonggi chapter, where many members of the largest faction belong.

Even if the party expels Kim and Lee, they can keep their seats in the parliament as independents under the current law.

In a move to pressure Lee and Kim to step down, some party members are doing their own investigation into the March primary and finding more evidence of voting fraud.

Park Mu, a member of the party’s internal probe team, said in an interview with Ohmynews Saturday that he found 15 voters whose ID numbers were duplicated in electoral rolls.

Park said that three voters in Gunsan, South Jeolla, used the same 13-digit ID number. In a polling station in Incheon, two voters had the same ID number even though they were of different genders.

“We searched only a small portion of data but found a bunch of vote-rigging,” Park said in the interview. “We need a comprehensive investigation into all votes in the primary.”

Concerns are also rising in the main opposition Democratic United Party which formed an alliance with the UPP for the April 11 legislative election.

“If people are turning their backs [on the UPP], we can’t form an alliance [in the future] even if we want to,” Park Jie-won, the DP chairman said yesterday in an interview with KBS. “People won’t understand different claims of the two emergency councils. They should be reformed as soon as possible.”