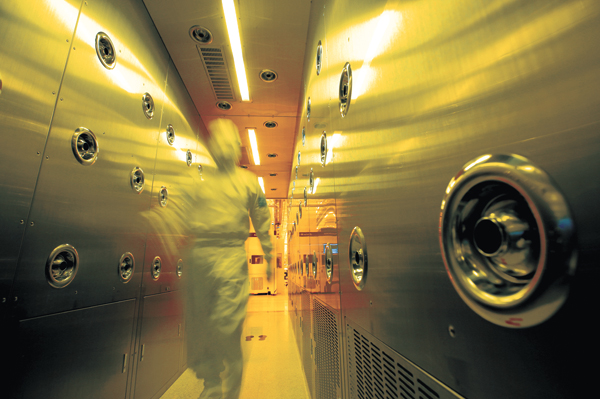 The growth outlook for the Korean economy is getting gloomier after the Organization for Economic Cooperation and Development lowered its estimate for the second time this year, citing turmoil in Europe, one of the main markets for the export-driven economy.

In its Economic Outlook released yesterday, the OECD lowered Korea’s economic growth for this year from the 3.5 percent projected last month to 3.3 percent.

This is lower than the Korean government’s outlook of 3.6 percent, which was released by the Korea Development Institute Sunday, or the 3.5 percent projected by the Bank of Korea (BOK) and the International Monetary Fund. 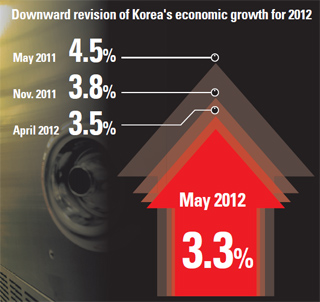 “Such a low forecast has been made probably because the global economy is suffering through euro zone risks and oil prices are expected to surge by around 10 percent,” said Kim Jeong-kwan at the Ministry of Strategy and Finance.

The country’s current account surplus is expected to fall to around 1.5 percent of GDP due to higher oil prices, the OECD said.

“On the external side, a stronger rebound in world trade could result in faster output growth in Korea. However, a deterioration in the euro area could weaken the global economy,” the report stated.

“Moreover, there is considerable uncertainty about growth in China, Korea’s major trading partner, and in other emerging countries,” it said. The OECD said another important risk for the country is rising oil prices.

On the domestic side, the organization expressed concern about the country’s soaring household debts, which reached 135 percent of average household incomes in 2011.

However, the report said Korea’s growth is projected to pick up gradually, led by a rebound in exports as world trade gains momentum.

The OECD said the implementation of the “front-loaded” Korea-U.S. free trade agreement will stimulate world trade in 2012.

“Stronger exports are likely to boost fixed investment and support private consumption,” the organization said in the report.

The OECD advised Korea’s central bank to raise its key interest rate gradually from the current level of 3.25 percent to keep inflation near the mid-point of its 2 to 4 percent target range.

However, many global experts including Moody’s and HSBC cautiously predict that the central bank would either freeze the current key borrowing rate at the current level of 3.25 percent or probably lower it as the global economy recently has become unstable as the sovereign debt crisis has been renewed.

Market experts have projected that the Korean government will likely lean towards a stimulus package as the economy will likely downshift in the second half.

However, how much of the stimulus package especially lowering the borrowing rate would contribute in revising the economy is in question as the Korean government has maintained a loose monetary policy since the global crisis in late 2008.

The OECD report also mentioned the Korean government should pursue its target of a balanced budget.

Meanwhile, the growth outlook for the global economy was kept at 3.4 percent, unchanged from last November, based on an assumption that “ global recovery is slowly regaining momentum.”

The OECD warned, “The euro zone crisis remains as the most important downside risk for the global economy at present.” It predicted the U.S. economy to grow 2.4 percent, up from 2 percent forecast last November. The euro area is forecast to have minus 0.1 percent growth.

Exports account for more than half of the nation’s GDP. A downsized global economy directly translates into a retreat for the Korean economy. Finance Minister Bahk Jae-wan and other government officials including BOK govenor Kim Choong-soo frequently emphasize the need to expand the domestic market.