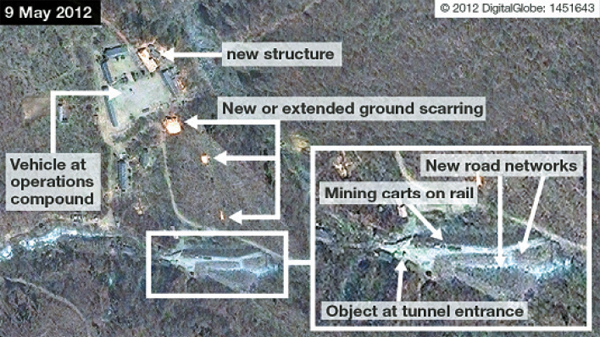 The most recent image, taken by DigitalGlobe on May 9 and analyzed by IHS Jane’s, shows new roads as well as carts and a vehicle at the North’s nuclear test site at Punggye-ri. Provided by IHS Jane’s


North Korea has been ramping up activity at a nuclear site in its northeastern region, a U.S. think tank said yesterday based on satellite imagery analysis, amid escalating urges by the international community for the regime not to conduct a third nuclear weapon test.

Military researcher IHS Jane’s analyzed two recent satellite images of the North’s nuclear test site at Punggye-ri in a weekly report, including one taken earlier this month, which showed mining carts and excavation equipment near the entrance to a tunnel and a large amount of debris from inside the tunnel.

The North’s first two nuclear tests, in 2006 and 2009, both took place underground at the site in Punggye-ri, Kilju County, North Hamkyong after tunneling work was observed in advance.

The more recent image, taken by DigitalGlobe on May 9 and provided by IHS Jane’s, showed new roads as well as carts and a vehicle at the site.

“There is a lot more earth being moved and roads being cleared around the new entrance to the underground chamber where a test would take place,” IHS Jane’s said in the report.

The possibility of a third nuclear test has prompted warnings from the international community, although similar warnings failed to dissuade the regime from testing a long-range missile last month, allegedly to launch a satellite into space. The April 13 launch failed within seconds of blastoff, with fragments of the rocket raining into the Yellow Sea.

Glyn Davies, U.S. envoy for North Korea policy, warned in Seoul Monday that it would be a “serious miscalculation” if the North made a provocation such as a nuclear test and it would face a strong reaction by the international community.

Another provocation would be a “signal that they can’t be trusted to follow through on their own undertakings and their own promises,” Davies said, referring to the North’s pledge of denuclearization during the six-party talks in September 2005. The North’s missile launch last month also followed a pledge to not conduct missile tests in a deal with the United States in February, which ultimately fell apart.