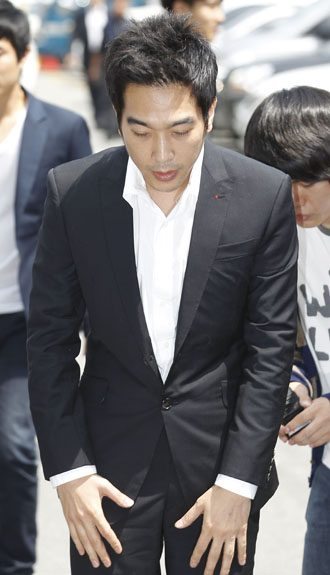 Entertainer Ko Young-wook spent yesterday morning at the Seoul Western District Prosecutors’ Office being interrogated by a judge who was to decide whether there was enough evidence to issue an arrest warrant.

Ko was detained and questioned on charges of sexual assault and sleeping with minors.

His agency refused to issue a statement. When Ko was transported to Yongsan Police Station at around noon, he told the press that there was “nothing left to say.”

Ko said he was sorry for causing a disturbance but kept quiet when the press asked if he was admitting guilt.

An application for an arrest warrant had been filed by the Seoul Western District Prosecutors’ Office two days earlier after investigating claims that he had used his celebrity status to talk minors into sleeping with him.

The first accusation against Ko was brought by a teenager and aspiring entertainer in March who claimed that the singer raped her after he suggested meeting up in order to talk about launching her career.