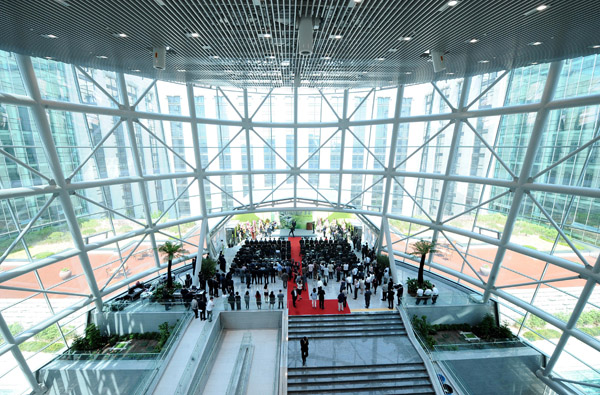 A ceremony to mark the completion of the new Members’ Office building takes place yesterday in Yeouido, Seoul. [NEWSIS]


The most expensive project in the history of the National Assembly was formally completed yesterday. A new Members’ Office building will open to house the 300 lawmakers and their aides in time for the upcoming legislative session.

The National Assembly Secretariat said yesterday the project of building a new Members’ Office and remodeling the old one will cost nearly 221.3 billion won ($188.6 million). Of the budget, nearly 188.2 billion won was allocated for construction of the new building, while the rest will be used to upgrade the existing building.

An additional 4.8 billion won will be spent to outfit the new building with furniture and carpet and host events for the opening of the upcoming Assembly, slated to begin June 5.

Although the 300 lawmakers and their 2,700 aides - nine assistants for each representative - have not moved in yet, the project was fiercely criticized by the public for its extravagant luxuriousness.

The building is about the same size as the new Seoul’s City Hall building. While the new city hall had a higher price tag of 298.9 billion for its construction, the building will hold nearly 10,500 public servants. In contrast, the new Members’ Office building will contain 3,000 - the 300 lawmakers and their aides.

The new lawmakers’ building was destined to face fierce criticism. The project began in April 2009 with the aim of enlarging a lawmaker’s office to the size of a minister’s office.

The initial budget was 180 billion won, but during the three years of construction, the cost continued to snowball. The original plan had two floors of underground parking to accommodate 440 cars, but the changed design will accommodate 1,095 cars in five basement parking floors.

A lawmaker’s office in the new building will occupy 148.76 square meters (1,593 square feet), far larger than the current office space of 82.64 square meters. The office space for lawmakers’ aides was doubled.

Of the 4.8 billion won earmarked to prepare for the opening of the upcoming Assembly, about 3.4 billion won will be spent to buy new furniture for the offices of the lawmakers and the National Assembly speaker.

Civic groups fiercely criticized the lawmakers’ plan. “The National Assembly will be the only place that uses such a luxurious space among all other state offices,” said Jeon Jin-han, head of the Center for Freedom of Information and Transparent Society. “We will closely monitor the legislature so that the lawmakers will actually use the space to serve the public good.”

Another expert also criticized the tradition of buying everything new whenever a new term starts at the legislature.

“In the White House, a new president chooses desks from the past presidents,” said Kim Jun-seok, a political science professor of Dongguk University. “Our lawmakers must build a tradition of inheriting from their predecessors, instead of throwing out perfectly good furniture.”

As criticism grew, Shin Joong-don, spokesman for the National Assembly Secretariat, clarified that the legislature is not spending a fortune to buy new furniture every four years. “The furniture is replaced when it gets too old,” he said. “We recycled old furniture and some of it dated back to 1997.”

He also said the size of a lawmaker’s office was inevitably enlarged because the number of aides for each lawmaker was increased. “It is too much to say that an office of 148.76 square meters is luxurious, when there are 10 people, including a lawmaker, working there,” Shin said.

“Because the building has glass walls, it may look too lavish,” Shin said. “But the National Assembly will do its best not to disappoint the public.”