In transition, hundreds were arrested in North

In transition, hundreds were arrested in North 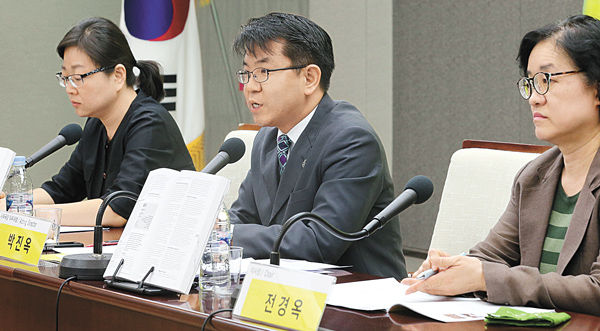 The Korean chapter of Amnesty International held a press conference yesterday to release its report on human rights in 155 countries in 2011. [YONHAP]


After North Korean leader Kim Jong-il died in December, Pyongyang arrested hundreds of officials and executed them or sent them to political prison camps to ensure a smooth transition of power, said a report released by Amnesty International.

Amnesty International yesterday released its annual report on human rights in 155 countries in 2011, including North Korea. 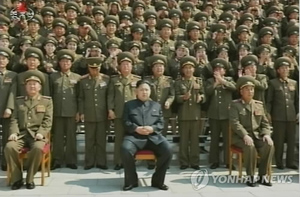 “In apparent preparation for a succession of power, unconfirmed reports suggested that, in January, the State Security Agency detained over 200 officials,” the report said, “some of whom were feared executed, while others were sent to political prison camps.”

Lee Yun-keol, a North Korean defector who chairs the North Korea Strategic Information Service Center, told the Korea JoongAng Daily that most of the persecuted officials would have been charged with neglecting their duties or receiving bribes.

“To consolidate his rule, Kim Jong-un reportedly ordered punishment of people who committed illegal acts such as bribery in order to tame the old officials, our sources told us,” Lee said. “That work would have already been carried out before the death of his father by his powerful guardian, Jang Song-thaek.”

“However, sources say that Kim Jong-un won’t kill those who surrender to him, and we don’t think he will execute all of the 200 officials detained by the State Security Department.”

Cheong Seong-chang, a senior fellow at the Sejong Institute, told the Korea JoongAng Daily that some of the executed or detained officials may have received bribes from people trying to defect from the North.

“Since the leadership of Kim Jong-un started, the new leader and the State Security Department has focused a lot on strengthening border security,” Cheong said. “I assume Kim Jong-un was also trying to solidify his rule by cracking down those officials who received bribes from border offices.”

Also targeted were North Koreans involved in diplomatic dialogue with the South, the Amnesty International report said, quoting unidentified sources, and some executions were disguised as car accidents.

“In July [2011], there were unconfirmed reports that the authorities had either executed by firing squad or killed in staged traffic accidents 30 officials who had participated in inter-Korean talks or supervised bilateral dialogue,” the report said. “On March 10, [2011], the Special Rapporteur on extrajudicial, summary or arbitrary executions wrote to the government regarding 37 reported cases of executions between 2007 and 2010 for ‘financial crimes’.”

Cheong speculated that Kim Jong-un was trying to crack down on officials who admired South Korea’s capitalism by executing the 37 officials who were involved with inter-Korean talks.

“I met with several North Korean officials who once participated in inter-Korean dialogues and they were mostly in favor of South Korea’s economic system, even admiring of it,” Cheong said. “When inter-Korean relations were friendly, they were safe, but now, with such frosty relations, those officials are easily suspected of being spies.”