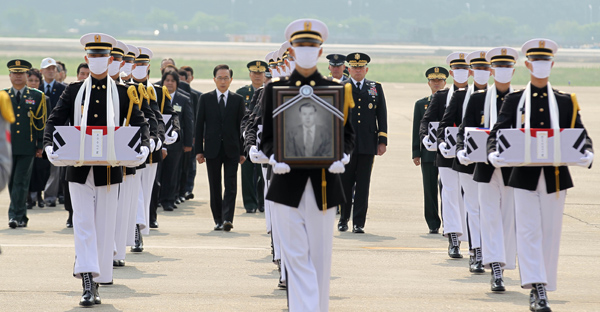 A military honor guard carries the remains of the 12 soldiers who died in North Korea during the Korean War at Seoul Airport in Seongnam, Gyeonggi, yesterday. President Lee Myung-bak and top military officials from South Korea and the United States attended the ceremony for the first repatriation since the 1953 cease-fire. A U.S. military recovery operation team excavated the remains and sent them home after examination showed they were South Korean soldiers. By Kim Kyung-bin


After more than six decades, remains of a dozen soldiers who died in North Korea during the Korean War were returned to their homeland - the first repatriation since the 1953 cease-fire between the two Koreas.

A special Air Force plane, carrying the caskets of the 12 soldiers, landed at Seoul Airport in Seongnam yesterday morning from Hawaii. The remains, excavated by the U.S. military during recovery operations in North Korea in the early 2000s, were sent home after examination showed they were South Korean soldiers.

It was the first time remains of South Korean soldiers killed in battles in the North had been returned home since the end of the war. While the U.S. military has performed dozens of operations in the communist country to bring home the remains of its own fallen soldiers, the South has never done so.

Two of the 12 soldiers had already been identified through DNA analysis and their surviving families came to the airport. President Lee Myung-bak and top military officials from South Korea and the United States also attended the ceremony.

According to the Ministry of National Defense, the remains of the 12 soldiers were recovered by the U.S. Joint POW/MIA Accounting Command, often known as JPAC, during operations in North Korea from 2000 to 2004. The remains were identified as members of the Korean Augmentation Troops to the United States Army and they were recovered at former battlegrounds in the North’s South Hamgyong Province.

After a joint analysis by the South Korean and U.S. militaries, two of the remains were identified as Private First Class Kim Yong-su and Private First Class Lee Gab-su. Both of them served the 15th Antiaircraft Artillery Automatic Weapons Battalion of the U.S. 7th Infantry Division, records showed.

According to the ministry, Private Kim was born in 1933 in Busan and joined the military voluntarily as a student soldier at the age of 18. A son of the anti-Japanese activist Kim In-ju, his family remembered him as a young patriot.

After being assigned to the 7th Division to serve as a Katusa member, he marched to the North along with his unit. Kim died in the fierce battle at Changjin Lake, better known in the United States as the Chosin Reservoir Campaign.

Born in Changbyeong, South Gyeongsang in 1916, Private Lee joined the military at the age of 34, leaving behind his wife and two young children. He was also assigned to the U.S. 7th Infantry Division and died in a battle in Hakalwoo-ri, near the Chanjin Reservoir. His dog tag was found at the site, but the remains were still transported to Hawaii because they were mixed with other excavated remains of American soldiers.

According to the ministry, the DNA samples of the 12 remains were cross-checked with 19,000 samples taken from the families of soldiers killed in the Korean War.

The remains of the two fallen privates will be temporarily stored at the ministry’s Agency for Killed-In-Action Recovery and Identification at Seoul National Cemetery along with the unidentified remains. After consulting with the families, the two will be interred at the National Cemetery in Daejeon in June.

The ministry said it will also continue working to identify the other 10 remains by analyzing records and DNAs.

After its first agreement with North Korea in 1993, the United States did a series of recovery operations in the communist country from 1996 till 2005. The operations have yielded 226 sets of remains believed to be those of the American forces. The two sides agreed in October last year to resume the operation, but it has yet to do so.

Through DNA analysis, JPAC’s research laboratory in Hawaii discovered that some of the remains were Asians. After cross-checking with the list of the Korean War veterans of the U.S. military, the South Korean Ministry of National Defense was notified in August last year about the 12 remains. The ministry sent a C-130 transport aircraft to JPAC, located in Hickam Air Force Base in Hawaii, on May 18. A Korean delegation, led by Army Brigadier General Jo Cheol-gyu, was in charge of the mission to bring home the fallen soldiers.

A ceremony to mark the handover of the remains took place in Hawaii on Tuesday, and Korean War veterans from the two countries attended the event along with senior military officials. After 20 hours of flying, the remains of the 12 came home, ending their 62 year exile from their homeland.

“I never thought that we would be able to find his remains,” said Lee Yeong-chan, a 65-year-old son of the late Private Lee. When his father joined the war, he was only four-years-old. “I don’t have a memory of calling my father,” he said in tears. “I knew he died in a place so far away, so I had no expectation of having his remains back. I just thought when the two Koreas were reunited, then I could go out and search for him.”

“Without the sacrifices of your fathers, uncles and brothers, the Republic of Korea would have not existed,” President Lee told the surviving families before the repatriation ceremony at the airport. “The remains of those who sacrificed their lives for the country will be recovered at all cost. They are the biggest contributors to the country.”

He also said recovery operation of fallen soldiers in the North would be one of the top priorities after the two Koreas are reunited. During the ceremony, Lee also raised his hand in salute to the fallen patriots.

While the United States has sent teams of military specialists to the North since 1996 following painstaking annual negotiations with Pyongyang over the terms and payments, the South has a relatively short history of seeking to recover and identify the remains of fallen soldiers.

A National Defense Ministry report showed that 178,000 South Korean soldiers are buried as Korean War unknowns in the National Cemetery. Another 130,000 South Koreans are unaccounted for from that war.

Marking the 50th anniversary of the Korean War, the South Korean government began its first project on its own soil in April 2000. As of last year, 6,965 remains were recovered from sites in South Korea.

Follow-up analysis later found that 6,003 were South Koreans, while 11 were identified as UN forces.

The remaining 951 were enemy soldiers killed in battles in the South.

The two Koreas agreed in 2007 during inter-Korean defense ministerial talks that they would jointly recover remains of fallen soldiers, agreeing that the mission was a humanitarian necessity.

According to the ministry, the remains of up to 40,000 South Korean soldiers were believed to be located in the North and the Demilitarized Zone.