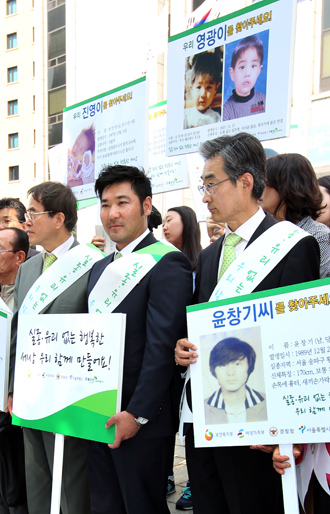 ChildFund Korea, a child welfare organization of the ChildFund Alliance in 50 countries, marks International Missing Children’s Day yesterday in front of the Korea Press Center, central Seoul to heighten awareness of missing children. The day was first held on May 25, 1983, in the United States. [YONHAP]

A mother will be reunited with the lost son she has been searching for 16 years after he went missing in Itaewon at the age of 3.

But she also learned she could have found him easily 16 years ago if she had gone to the police.

The Yongsan Police Precinct said on Thursday that a 46-year-old mother, surnamed Hong, received a call from police on May 18, a week ahead of International Missing Children’s Day yesterday. They had tracked her missing son, now 19. A DNA test confirmed his identity.

The tragedy began in early afternoon on Aug. 10, 1996, when Hong’s husband went to a restaurant in Itaewon, central Seoul, to meet a friend for drinks. He took his son, then 3 years old, with him.

The toddler wandered off and his father didn’t notice. When he finally noticed the boy was gone, he made a panicked call to his wife.

With that call, the nightmare for Hong began.

She quit her job and spent every day wandering the streets of Itaewon, Hanam-dong and every corner of Yongsan District for the next two years in search of her missing son, knocking on houses door to door, asking, “Have you seen a 3-year-old boy?”

For some reason, the couple didn’t have a good photo of their son so they couldn’t produce missing child leaflets.

Hong and her husband’s relationship was already on the rocks, and they had been living separately prior to their child’s disappearance. The loss of the boy led to their divorce.

Facing economic difficulties, Hong gave up her search and remarried but could never get over the pain in her heart. Her second marriage also ended in divorce.

This year, she learned she was in the early stages of cancer and renewed her search for her son. “I must see my son’s face again before I die,” she told herself.

Hong asked for help in March at a police station in Wonju, Gangwon, where she currently resides, only to be hit with the shocking revelation that her son had never been reported missing with the police. She assumed her husband had reported him missing.

The case was transferred to the Yongsan Police Precinct since the boy disappeared in the district. The police tracked down a Seoul orphanage that the son had stayed in and finally found the son, surnamed Park, who lives in Mokpo, South Jeolla. A DNA test confirmed he was indeed her son.

When he wandered away from his father in Itaewon, Park had been picked up by police and placed in an orphanage in Dongjak District, northwestern Seoul. He was adopted by a family in South Jeolla in October 1997. In second grade, he learned he had been adopted. Afterwards he entered a rebellious phase and skipped classes, caused mischief and even ran away from home.

Unable to handle him, his adoptive parents returned him to an orphanage in Sinan County, South Jeolla, in 2003. The following year, Park was adopted for the second time and has been living with his new adoptive parents since.

“For 16 years, I was so sorry and longed to see him, but after the divorce, there was no means of finding him, so I prayed that he was living well,” said Hong.

“I never dreamed the police would really find him.”

The police also said on Thursday that the number of missing children under the age of 14 more than doubled over five years since 2006 to 11,425 last year.

Though Hong wanted to rush to see her son right way, she underwent surgery for cancer last week and is not in stable health.

“When I recover my health, I plan to see my son around mid-June.”
By Sarah Kim[sarahkim@joongang.co.kr], Han Yeong-ik