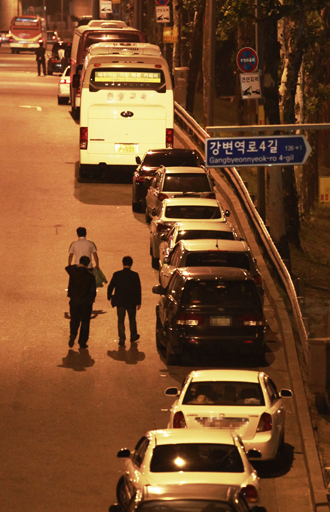 Seoulites follow the driver of a “bullet taxi” that will take them to Sabuk, Gangwon, home of the Kangwon Land Casino, in a white-knuckled ride of just 100 minutes, near Dong Seoul Terminal in Gwangjin District, eastern Seoul, on Thursday. Kangwon Land is the only casino in which Koreans are allowed to gamble. Many gamblers want to get there fast so they can gamble and return to Seoul for work the next day. The trip takes three hours by express buses. By Park Sang-moon

It’s a Friday evening and I’m wandering around a taxi stand at Dong Seoul Bus Terminal in Gwangjin District, eastern Seoul. I’m not normally a fan of fancy designer goods, but I’m decked out with a silver Emporio Armani watch, Louis Vuitton shoes and a Gucci messenger bag slung on my shoulder. The look is not for the ladies. I’m trying to look like an office worker who’s fallen into the pit of compulsive gambling.

Korea has 17 casinos, heavily promoted by billboards at the airport, around town and overseas. But Korean nationals are technically not allowed to enter 16 of them: they are for foreigners. There is only one casino open to Koreans and it’s located in the boondocks to keep temptation as far away as possible from residents of Seoul and other metropolitan areas. The 12-year-old Kangwon Land Casino is in Sabuk in eastern Gangwon, a three-hour trip by express bus.

That’s much too long a trip for the dedicated gamblers of Seoul, who need to get to the casino after work, make (or lose) a fortune and return to the city for work the next day. After work, they head to the Dong Seoul Bus Terminal to find a “bullet taxi.”

A taxi driver in his mid-40s approaches me. “Going to Sabuk?”

Bullet taxis drive so fast and recklessly that they charge a lot: up to 170,000 won ($145) if a passenger travels alone. It’s worth it because they get you to the casino in 100 minutes. Plus, bullet taxis are usually luxury sedans such as the Hyundai Grandeur, Equus and Kia K7.

The driver lowers his price to 150,000 won, but I tell him I’ll wait for someone to share with.

“Dude, you’re going to the casino to win big money and you’re trying to save tens of thousands of won?” he says incredulously. “You will realize soon that that amount is nothing in there.” 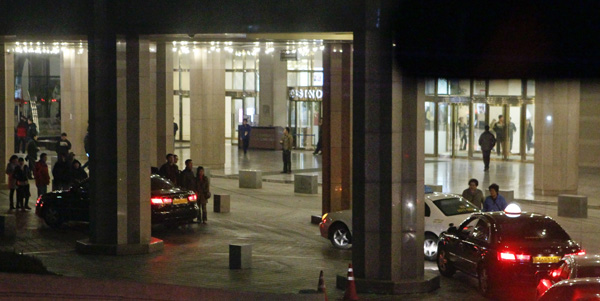 “Bullet taxis” and their touts trying to take compulsive gamblers back to Seoul around 6 a.m. as the casino’s closing time nears. [JoongAng Ilbo]


I watch TV in the terminal and a different driver approaches. “Are you the one waiting for seatmates?” he asks. I ask what happened to my driver. “He took off already with a passenger who wanted to go alone.”

He leads me to a parking lot containing a dozen black sedans. A banner has been hung nearby. It reads: “Stop taking illegal and uninsured bullet taxis that threaten your life!”

“Oh God, please look over me!” I think. It’s the first time I’ve prayed since the age of 7, when I wanted a baby sister.

Most of the taxis are rented cars, distinguishable by the letter “Heo” on their license plates. This does nothing to calm my fears.

Two men are already sitting in a black Equus sedan.

“Okay, I hope all of you hit the jackpot today,” the driver optimistically tells us. He wears dark sunglass even though it’s past 7 p.m.

The driver starts flaunting prodigious skills in fast lane changes, cutting off other cars that are consequently forced to break hard. In our wake are numerous angry honks.

When we near the No. 2 Jungbu Expressway, the driver receives a call from one of his buddies ahead of us.

“An accident?” He informs us that we will make a detour because a 25-ton truck crashed into the median strip and overturned at Sangok Junction.

“The driver who tried to persuade you to take his taxi is stuck and the passenger is pissed off,” he laughs.

The driver speeds up, cruising between 160 to 180 kilometers per hour (99 to 112 miles per hour). I feel whipsawed as the taxi veers between lanes and frequently brakes. “Are you okay with this?” I ask the passenger sitting next to me.

“Is this your first bullet taxi?” he asks.

I tell him it’s my first visit to the casino.

“First time?” Everyone in the cab is surprised. “Young man, do not step into this world, especially at your age,” says the fellow passenger.

He introduces himself as a 47-year-old car engineer working for a big corporation and talks about his heroic exploits in Kangwon Land.

“I have been going there for nine years,” he says. “I lived in my own luxurious, high-rise apartment in Gangnam, but now I’m living in a tiny and crappy jeonse [long-term housing deposit] apartment, which is worth only 100 million won, in Gangbuk District because of gambling. But I can’t stop.”

He tells me he won 40 million won at blackjack on his first visit.

“I never knew that the 40 million won would come back as hundreds of millions of won in debts.” He lights a cigarette.

“I was only in my mid-30s at the time, but I won as much money as my annual salary by playing blackjack for five to six hours. I seriously fell into gambling, started taking these bullet taxis because I wanted to gamble every night. I wasn’t able to concentrate on work and was frequently late to the office.”

He exhales smoke. “Every one of my colleagues knew that something was wrong with me. Everyone but me.”

The taxi makes a sudden stop at a gas station. My seatmate takes me to a container next to the gas station outfitted as a lounge with tables, chairs and a free coffee vending machine. “The owner of this gas station is also a famous gambler at the casino,” Lim explains.

“It’s a kind of rundown now, but once it was a famous stop for gamblers because of tours offering various services, including private loans, came all the way down here. They made some furtive offers, too, including prostitutes.”

When we reach the vicinity of the casino, nobody has to inform me. The shops are all pawnshops - willing to lend a little betting money in exchange for jewelry or cars - and there are a dozen private loan offices, all of them shining brightly and open all night. Massage places are festooned with banners reading the following:

“We will take good care of your tired feet and body so you can hit the jackpot tomorrow!” and “Get massages with golden hands that have won big in Kangwon Land!”

“What game are you going to play?” my seatmate asks.

I say I’ll play some slots and hopefully blackjack.

“Did you reserve your seat or hire any aengbeolee?”

With rookie’s shame, I ask what an aengbeolee is.

“Dude!” He shakes his head. “They’re like panhandlers we hire to take care of little errands.”

Seats are tight at the blackjack, poker and baccarat tables, and you can get reserved seat tickets via mobile phone. The aengbeolee get the tickets and occupy the seats until their patrons arrive. They’re paid 100,000 won to 150,000 won daily.

Most of the aengbeolees are bankrupted gambling addicts who now live on the fringes of the gambling world.

“Stick with me and learn about the casino if you don’t want to be a pushover,” he suggests. We purchase entrance tickets for 5,000 won and enter the casino.

“Good luck, sir,” an attractive hostess tells me with a smile.

The second and final part of this series appears tomorrow.