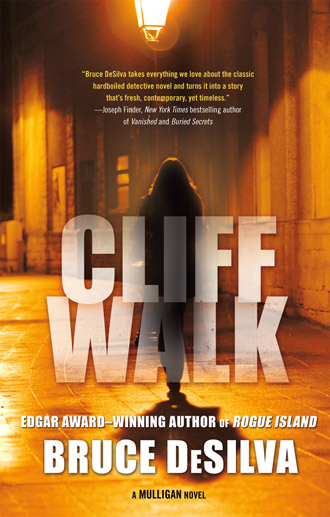 Mulligan, an old-school newspaperman with a taste for whiskey, cigars and irreverent humor, returns in the chilling murder mystery “Cliff Walk,’’ whose sometimes violent plot is tempered by the hero’s wry observations on print journalism’s seemingly inexorable decline.

Recent staff consolidation and cutbacks have forced Mulligan to churn out light stories on topics such as high-society parties.

But a charity gala in posh Newport turns into real news when a guest is murdered atop the rocky Cliff Walk separating the area’s Gilded Age mansions from the sea. Police believe the victim to be Sal Maniella, a millionaire pornographer and strip club owner, but mysteries abound as none of Maniella’s friends or family will consent to identify the body.

Mulligan teams up with Maniella’s beautiful, brainy female attorney to unravel the case, whose scope widens to include prostitution, child abuse, multiple homicides and an enduring vendetta.

Along the way, he receives help from a colorful cast of supporting characters, including a no-nonsense state attorney general nicknamed “Attila the Nun” who is loosely modeled on real-life Rhode Island politician Arlene Violet, who left the Sisters of Mercy religious order to pursue public office.

Despite the book’s sexually charged situations and graphic crime-scene descriptions, DeSilva’s masterful narrative style ensures that any shocking details remain firmly in service of the plot and the tone never turns exploitative. AP