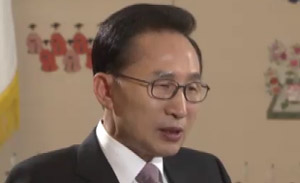 President Lee Myung-bak yesterday made his first open criticism toward the people in South Korea who show blind support for the North.

In his biweekly radio address, Lee criticized Pyongyang for having denied its responsibilities for the 1983 bombing in Myanmar and the 2010 sinking of the Cheonan and blamed the South for having fabricated the incidents. He then said he was even more worried about some South Koreans who blindly support the North’s arguments.

“The North has repeatedly made such wild assertions, but what is more problematic are some pro-North Korea groups within our society,” Lee said.

“Just like the international community is demanding that the North change, those people who unconditionally support North Korea must change; they are, after all, living inSouth Korea that has joined the ranks of advanced countries.”

It is the first time that Lee, as the president, openly criticized the pro-Pyongyang groups in the South. The remarks were also made as the ruling and opposition parties were conflicted over the fates of some lawmakers-elect who were labeled as pro-North politicians.

Referring to his visit earlier this month to Myanmar, the first time a South Korean leader has done so since 1983, Lee said the reclusive Asian country has remained one of the poorest nations in the world because of a long history of dictatorship, but has decided to open up to the international community and begin efforts of democratization.

“I only feel sorrow for North Korea,” Lee said.

“It goes without saying that the whole nation genuinely wants to help the 20 million North Korean residents undergoing hardships in whatever way we can.”

Lee said he told Myanmar’s President Thein Sein during his visit that he hopes the North learn from Myanmar as well as from Vietnam and China.