For casino regulars, luck is a fickle date

For casino regulars, luck is a fickle date 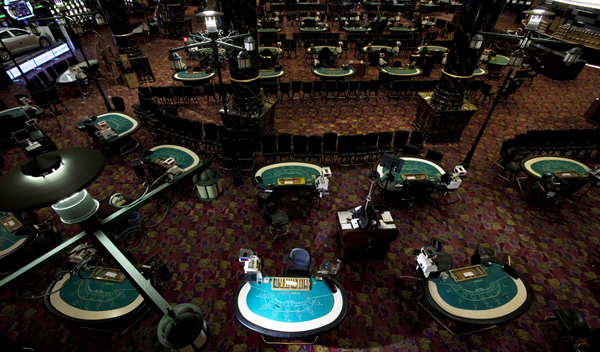 The interior of the Kangwon Land Casino. The casino doesn’t usually allow snapshots inside, but it did allow Korean media to photograph the hall in mid-April after wireless, subminiature cameras were found in card boxes on the gaming tables. By Park Jong-keun

My seatmate from the bullet taxi from Seoul has approached one of the aengbeolee, the dogsbodies of the gambling world, who spend their days holding seats at tables for better off gamblers, running errands, and betting away the small sums they are paid. As it happens, the high rollers and the aengbeolees never use each other’s real names, preferring emo (aunt) and samchon (uncle). “I’ve known this woman for three years,” my taxi-mate says under his breath, “but we’ve never exchanged names.”

The aengbeolee is playing blackjack, concentrating intensely on the dealer’s cards.

“How is it going?” he whispers.

The aengbeolee woman doesn’t look at him. She holds up her right hand with her forefinger and middle finger extended.

They start playing as a team. Lim provides the chips as capital, and she makes the bets. With each hand, they groan or cheer in unison. “Oh God, so close!” Joyful high-fives follow wins.

It then strikes me that the people seated at the tables are only the tip of the iceberg in terms of who’s playing. The casino is so crowded - it gets seven million visitors a year - that seats are reserved in advance via cellphone, usually by the aengbeolee. But the crush of people behind them are also betting through the aengbeolee. They sometimes switch roles, and the dealers don’t mind. Nobody complains. The serious gamblers and their aengbeolees dominate the table games. The slot machines are popular with newbies and tourists.

I refuse with a smile. I don’t want to tell him that 300,000 won is my entire gambling capital. I say I’ll play the slots for a while.

“Well, good luck and come back here if you need any help,” he replies without looking back.

The slot machines are fully occupied and I have to wait 35 minutes before I can play “Reel Game.” I insert a 50,000 won bill, which is about 16 percent of my total game money, and start to play.

Each spin is 1,000 won. When my credit has sunk to a worrying 8,300 won, the lights on my machine magically blink for about four seconds and I realize I have won. My credit goes up to 77,000 won.

I agonize whether to quit while I’m ahead, worrying that my beginner’s luck will abandon me. But it’s only 11 p.m. I insert another 50,000 won bill. It’s all gone in 20 minutes.

I feel a little angry. I choose another machine and insert another 50,000 won bill, and now 33 percent of my capital is gone. I decide to raise my bets to 2,000 won a spin and start playing like mad. My betting strategy works! Those lovely lights flash again and my credit goes from 22,000 won to 148,000 won.

“Yes!” I shout. How stupid I was to stick with that first machine. This one is the lucky one.

In 30 minutes, I have lost all the 300,000 won I came with. I get mad. I seriously miss my dear Sinsaimdang - a great woman of the Joseon Dynasty whose calm visage emblazons the 50,000 won note - and decide to get the lady back. I stand in front of an ATM machine and pull out my credit card. I look at my reflection in the machine’s surface and see my face distorted with anger.

I move to a small hall next to the casino where free coffee, water and sodas are provided. It has no chairs. The casino doesn’t want people to sit anywhere but in front of a slot machine or a gaming table. Kangwon Land had 1.6 trillion won in revenue last year, and although it has hotels, condos and a golf course, the people around me don’t look like the golfing type. According to its CEO, 90 percent of Kangwon Land’s revenue comes from its 132 game tables and 960 slot machines.

“Are you the one with the samchon?”

I look back and find the aengbeolee who was playing blackjack with my taxi-mate from Seoul. She’s in her mid-50s, dressing in a black sweat suit with a small bag on her waist in which she carries three cellphones and chips. I tell her I’ve already lost 300,000 won.

“Only two bullet taxi fares,” she consoles. She asks if I want to play more. I tell her that I’m out of capital.

She shakes her head and leads me out of the casino and down to an underground level where loan sharks and pawnshop owners are hunting for potential customers.

She introduces me to one of them and then disappears.

The man takes me out of the building and lights a cigarette. “Do you have any goods that can be used as collateral?”

I pull out my Macbook Air laptop and my new 16 GB iPad, emphasizing that the iPad is only two-weeks-old.

I tell him the original prices for the lap top and the iPad.

I can see he’s not going to yield. I pull out my final hockable item, the key of my Hyundai Tucson SUV back in Seoul, which is worth about 30 million won.

“Is it leased, sir?” His tone gets much more respectful.

I tell him I still have five monthly installments to pay.

He walks off about five meters and makes a call. I can hear him telling someone the make of my SUV. Then he returns.

“Twenty-three million won,” he says. A portion will be given in cash and the balance wired to my bank account after I sign some documents. He informs me that I have to pay the remaining five monthly installments, and if I can’t pay off his loan, the car will be taken within a month. He explains that I can extend payments on the loan but seven percent of the car’s value must be paid as interest every month.

This has gotten very serious very fast. I ask him for a few seconds and then make a pretend call to my wife, who doesn’t exist.

“Oh honey, please,” I say loudly. “Stop talking about divorce for God’s sake!” I end the call and tell him that I can’t do it.

“What about those?” He points at my laptop and iPad.

“Sorry,” I say, hurrying away with mincing steps.

At 4 a.m., two hours before the casino closes for four hours of clean-up, I rejoin my bullet taxi buddy. I ask him why he’s stopped playing.

“Because it’s massacre time,” he says. “The casino begins killing gamblers to close the hall naturally. The win rate for gamblers rapidly decreases in the next two hours.” He says this is a lesson he has learned from nine years of gambling in the casino. “Most of the gamblers playing in these hours are aengbeolee who have seriously fallen into the gambling swamp,” he says. “They also know they won’t win, but they just can’t stop.”

Lim says he’s going back to Seoul and asks if I want to share a bullet taxi. Just the idea of that velocity on blackened roads scares me. I tell him I will stay the night at a motel. We exchange goodbyes. The bullet taxi driver who took me to the casino makes a call to a local acquaintance and a Hyundai Avante sedan arrives to bring me to a motel.

When I check in, I involuntarily sigh with weariness.

“Not a good night sir?” the motel owner asks.

“I’m very sorry for saying this,” I respond, “but this place is crazy.” I admit that it was my first time in the casino and give my impressions.

The motel owner asks my age and then goes silent for a while.

“You know, we can’t deny that we earn money from people visiting the casino,” he says. “But we feel sorry sometimes when we see people like you who look like you have a decent job and a life. If you can’t handle your will, you shouldn’t be here. Because it will destroy you.”