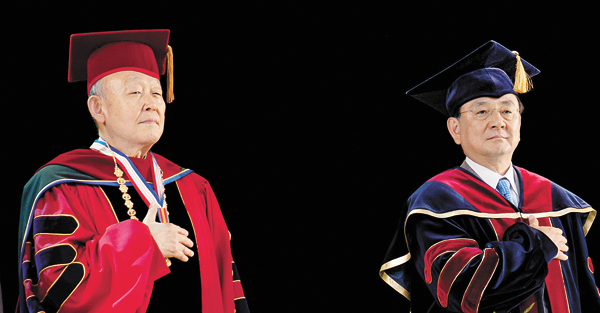 Hong Seok-hyun, right, chairman of the JoongAng Ilbo, receives an honorary doctorate degree in international relations from the KIMEP University in Almaty, Kazakhstan, on Saturday. By Ahn Sung-gyu


ALMATY, Kazakhstan - Hong Seok-hyun, chairman of the JoongAng Ilbo, received an honorary doctorate degree in international relations from a leading Kazakh university during its graduation ceremony on Saturday, attended by 3,000 graduates, professors and guests.

“Chairman Hong has put a lifelong effort into education, public service and cultural exchange and has firmly contributed through education, dialogue and global partnership to the strengthening of international relations,” said Bettina Espe, vice president of the KIMEP University.

KIMEP University, formerly known as the Kazakhstan Institute of Management, Economics and Strategic Research, is a private and nonprofit U.S.-style academic institution founded in 1992 by the resolution of President Nursultan Nazarbayev of Kazakhstan. Most lectures are held in English and it has the largest English-language library in the Commonwealth of Independent States.

After receiving the degree, Hong presented a 20-minute speech on the advent of the Asian era and the importance of a lifelong education.

Hong said in his speech, “In preparing for prosperity and solidarity in an era of a strong and far-reaching Asia, for top college graduates to stay competitive, lifelong learning is needed.”

“While focus is concentrated on China and India right now, other Asian countries will definitely play an important role. Someday, we might belong to an Asian union comparable to the European Union,” he said.