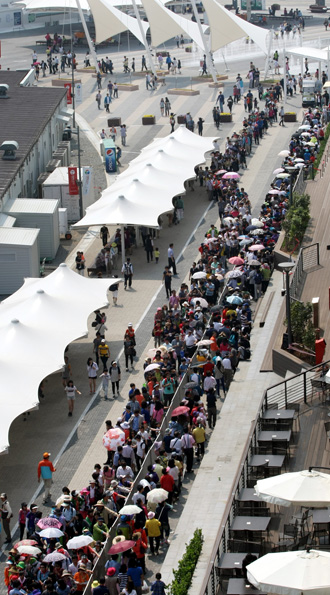 Visitors waiting to get into the Aquarium Pavilion, the most popular attraction at the 2012 Yeosu Expo, form a line of about 3 kilometers (1.86 miles) from early morning yesterday in front of the gate of Hanwha Aqua Planet in Yeosu, South Jeolla. [NEWSIS]

YEOSU, South Jeolla - A day after the 2012 Yeosu Expo unplugged its advance reservation system for attractions and announced that everything would be operated on a first-come-first-served basis, attendance plummeted, the lines were long and tempers short.

At 10 a.m. yesterday, the line to get into the Aquarium Pavilion, one of the most popular exhibitions, was about three kilometers long (1.86 miles) and it stayed that way until late in the afternoon.

“This is ridiculous!” thundered 37-year-old Park Seong-mo, who came from Jeonju, North Jeolla, to enjoy the expo. “I’ve been waiting in this damn line since 9 a.m. and the staff tells me I’ll be waiting until 4 p.m. Am I here to see attractions or just hang out with a lot of strangers?”

On Sunday, the expo organizing committee scrapped its ticket reservation system for the most popular eight exhibitions, including the aquarium, after angry complaints from visitors who didn’t book in advance and had to wait in long lines or couldn’t get in at all.

The organizers had sold 30 percent of available tickets through its official Web site and a smartphone application, and the remaining 70 percent though 85 machines at the expo.

Before the expo opened, the organizers were proud of their reservation system, predicting the Yeosu Expo would foster a better exhibition culture in Korea because people wouldn’t have to wait in long lines.

But people who didn’t make advance reservations complained that it favored the young, tech-savvy people from the big cities and discriminated against older people and rural folk.

After 16 days, the organizers pulled the plug on both the online system and the tickets issued from the kiosks on site.

The long lines were anticipated and attendance plummeted from 111,131 on Sunday to 42,000 yesterday, which was the national holiday of Buddha’s birthday. Even so, the lines grew longer.

It took five to seven hours to get into the aquarium and three to four hours for the DSME Marine Robot Pavilion, another of the eight popular exhibitions. People waited under a scorching sun and harsh words were exchanged when people tried to cut ahead in line.

“We’re having a hard time in controlling crowds who are complaining about the tedious wait,” a staffer at the aquarium told the JoongAng Ilbo. “When the ticket reservation system existed, people only had to wait about an hour to get in, but now it takes more than three hours.”

“I understand about closing the online reservation system because it was only familiar to young people, but they should keep selling tickets through the machines,” said a visitor from Busan. “I’ve lost my faith in the organizers and I think people visiting from outside the country would feel the same way.”