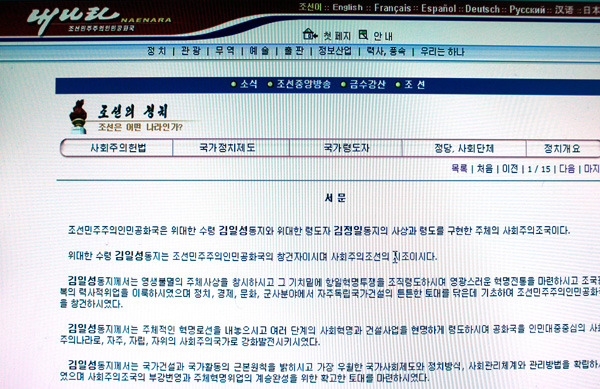 Naenara (My country), a North Korean state-run Web site, posts the revised foreword of the constitution in which North Korea calls itself a nuclear-armed state. [YONHAP]


North Korea inscribed its status as a nuclear weapon state in the foreword of its revised constitution, according to its state media yesterday, making it harder than ever for international diplomacy to get the regime back to negotiations to shut down its nuclear weapons program. 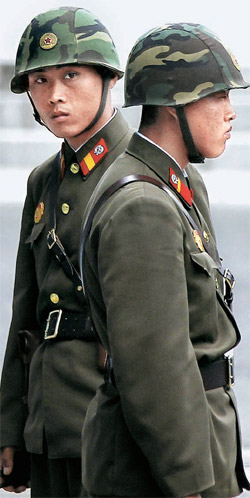 It may also end the long-running six-party talks on denuclearization of the North involving two Koreas, the U.S., China, Japan and Russia.

The revision, described by the Tokyo branch of the Korean Central News Agency, the North’s state-run media, also added to the foreword that the nuclear-weapon status was part of the legacy of the regime’s former leader Kim Jong-il.

“Our comrade Kim Jong-il ... safeguarded socialism, the honorable legacy of comrade Kim Il Sung, transformed our mother country into an undefeated, political ideology power, a nuclear state and invincible military power and has paved a glittering boulevard for the construction of a strong and prosperous country,” reads the new foreword, which was revised last month, according to the Tokyo branch of the KCNA.

Previously North Korea had been slightly more circumspect in touting its nuclear weapons capability so as not to directly contradict a pledge of denuclearization by the North’s founder Kim Il Sung.

With the revision, the North is pulling off an “uncomfortable mask” and making its nuclear ambition “sacrosanct,” said Jeon Seong-hun, a researcher at the Korea Institute for National Unification,

“Demanding denuclearization of North Korea is now demanding it change its constitution,” Jeon said. “It means that they don’t want you to talk about it anymore.”

Observers said the move was an outright rejection of several agreements to denuclearize the North has made with the international community, including the Sept. 19, 2005 agreement during the six-party talks, the Joint Declaration with South Korea in 1991, and an agreement with the U.S. in Geneva in 2000.

In another deal with the United States last February, the North promised to suspend tests of nuclear weapons and long-range missiles, a moratorium on its uranium enrichment program and to allow the return of international inspectors into the country’s main nuclear site in exchange for food aid. It breached the deal with a botched long-range missile test April 13.

Some observers said the stalled six-party talks could be dead.

Some observers see it differently and said it is a calculation by the North to increase its leverage in negotiations with the rest of the world.

Japan’s Kyodo News Agency said that the Kim Jong-un regime would use the nuclear status as a diplomatic card toward the international community and retain its hard-line stance.

Koh Yu-hwan, a professor at Dongguk, said he sees a diminished chance of a third nuclear test by the North after the revised constitution.