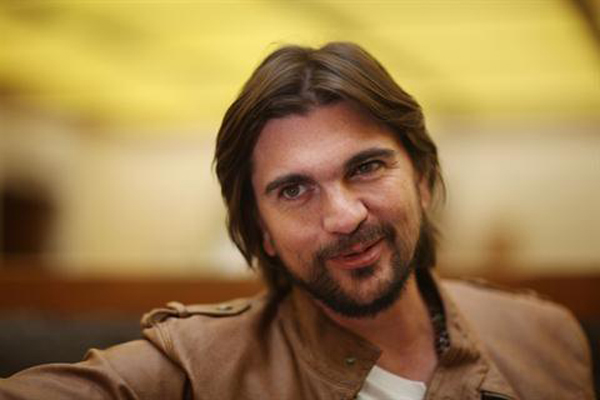 NEW YORK - Colombian superstar Juanes said singer-songwriter-producer Juan Luis Guerra got him out of his comfort zone when the musician started rearranging his songs for his “MTV Unplugged’’ taping.

And Juanes was happy to take on the challenge.

Guerra, the Dominican Grammy-winning producer, is known for his bachata and merengue sound. He’s won the Latin Grammy for album of the year three times. Juanes, also a Grammy winner, has a sound that is built from rock and metal genres. The singer said the 14 songs on “Juanes: MTV Unplugged,’’ released this week, are a blend of Latin, jazz, blues, rock, folk and classical sounds. He says the process felt new.

“You know, it’s scary, but it’s kind of what I’m looking for now,’’ he said. “Just to take the risk and go to different places and try different things.’’

The first single, “Le Senal [The Sign],’’ has peaked at No. 1 on Billboard’s U.S. Latin Songs chart. The special, which aired Monday, was taped at the New World Symphony Center in Miami Beach, Florida, in February.

Juanes says a new sound will be all over his upcoming studio album, due out next year. “The ‘Unplugged’ right now is like a transition album. It’s going to give [me] some more time to keep writing my songs and go the studio. It’s going to be completely different, wild, loud and happy.’’

The 39-year-old is married to model-actress Karen Martinez. He says he’s noticed his musical abilities in his daughters, ages 7 and 8, who are taking piano lessons. He also has a 2-year-old son, who he says is “crazy for cars and superheroes.’’

“Unplugged’’ is the singer’s first release since splitting with his longtime manager, Fernan Martinez.

“It’s all about cycles, things stop and sometimes things end,’’ he said of the split. “And now I just feel like writing new pages of my life, new chapters. So I feel really positive, and at the same time really thankful for the past.’’ AP