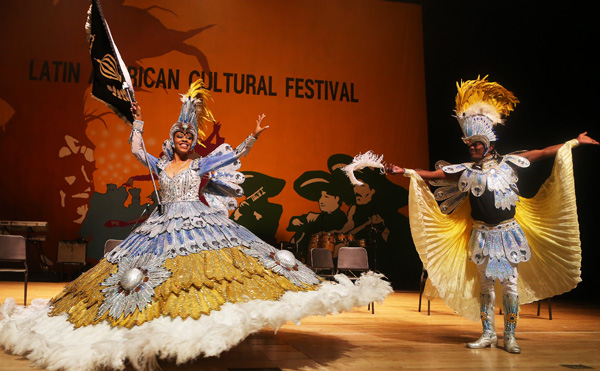 A dancing and music troupe from Brazil showcases samba for a photo session yesterday at the National Museum of Korea, where the Latin American Cultural Festival, co-hosted by the Ministry of Foreign Affairs and Trade and the Korea Foundation, will be held. The festival will last until Sunday. [YONHAP]


A cultural event featuring a variety of Latin-American arts and traditions kicked off its official run in Seoul and two other Korean cities yesterday.

The Latin American Cultural Festival, co-hosted by the Ministry of Foreign Affairs and Trade and the Korea Foundation, featured the abridged dancing performances by seven Latin American countries on stage last night during its opening ceremony held at the Theater Yong at the National Museum of Korea in Yongsan, Seoul.

The dancing teams will stage unabridged performances at the same theater during the rest of the festival, which runs through Sunday.

The performances by the teams will also be held on Nami Island, Chuncheon, Gangwon and Gyeongju, North Gyeongsang throughout Sunday.

A photo exhibition, which showcases artwork by famous Latin American photographers of tourist attractions, scenery and people of 13 Latin American countries, will be held at the Korea Foundation Cultural Center in central Seoul until Sunday.

The center will hold seminars and lectures on Latin culture as well as interviews with novelists from Latin American countries.

Two lectures, each on Latin fine arts and Latin festivals, are also slated to be held at the National Museum of Korea Sunday.

Prior to the opening, the dancing and music troupes from Brazil, Jamaica, Colombia and Mexico showcased bossa nova, reggae, Caribbean and mariachi performances at the Cheonggye Stream, central Seoul, between last Saturday and Tuesday.

The annual festival is part of the two-way cultural exchange program initiated by the Foreign Ministry in 2006 to enable Koreans to experience the cultural aspects of lesser-known countries for them such as in South America, the Middle East, Africa, Southeast Asia and Central Asia.

For each festival, the ministry introduced the cultures from one area. It is the second time Latin culture has been featured since 2009.

For Korea, this year marks the 50th anniversary of diplomatic ties with five of the Latin American countries, including Ecuador, Mexico, Colombia, Jamaica and Argentina.