Left:Lim meets North Korea’s founder Kim Il Sung in July 1989. She went to the North without approval, and was jailed for violating the National Security Law. Captured from North Korea state media by the New Daily in Seoul. Right: Lim Soo-kyung, a lawmaker from the Democratic United Party.[NEWSIS]

A prominent lawmaker of the main opposition Democratic United Party condemned defectors from North Korea and a ruling party lawmaker who champions human rights in the North, calling them “betrayers” and “sons of bitches.”

The profanity-laced comments by DUP lawmaker Lim Soo-kyung during a shouting match in a Jongno restaurant were reported by Baek Yosep, a 28-year-old defector from the North and secretary general for a local association of young North Korean refugees. 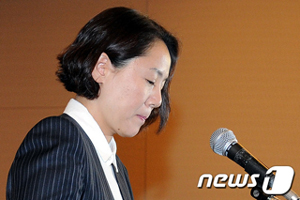 Baek reported the altercation on his Facebook profile yesterday.

Baek said he was having dinner in a restaurant in Jongno District, central Seoul, with friends on Friday night when he noticed that Lim was drinking with two or three men at another table.

Baek and Lim met previously during a televised debate on the National Security Law. Although they were on opposite sides of the debate, Baek said he was a fan of Lim, an icon of liberals advocating for reunification of the two Koreas. Lim was imprisoned for three and a half years for violating the National Security Law by visiting North Korea in 1989.

Baek approached Lim and asked her to take a photo with him. She welcomed the request and several pictures were taken.

A little while later, a waiter approached Baek’s table, saying Lim’s aides wanted all the photos deleted from his phone.

Baek complained to Lim’s aides, and Lim replied, “They were just worried that [the photos] would damage my reputation. Please understand.”

Baek responded with a joke to the lawmaker. “Do you know how the North Korean regime would handle a situation like this? They’d shoot your aides. How dare they do something that wasn’t ordered by the ‘dear leader’?”

Lim’s face hardened, and she asked, “Who are you?”

Baek told her he is a North Korean defector and they had met each other at the televised TV debate.

Lim’s response, according to Baek: “Hey you, don’t misbehave, you know nothing. Do you know that the Republic of Korea is a democratic country? How can a son of a bitch like you, a North Korean defector of humble birth, come and challenge a lawmaker of the South Korean parliament?”

She then brought up the name of Ha Tae-keung, another student activist from the 1970s and 1980s who started condemning the dictatorship and human rights abuses in the North. Ha won a seat in the National Assembly from Busan on the ruling Saenuri Party ticket in the April 11 legislative election.

Lim said, “You are doing the weird things, dubbed a fight for North Korean human rights, with Ha Tae-keung, right? Ha is a son of a bitch betrayer and I will kill him with my hand .?.?.”

Baek responded to Lim and said, “Who betrayed whom? Do you mean Lawmaker Ha and us, North Korean defectors, betrayed the murderer Kim Il Sung [founder of North Korea], whom you called ‘your father’?”

Extremely infuriated, Lim yelled, “How dare you North Korean defectors, sons of bitch, challenge a South Korean lawmaker? Shut up and live silently in the Republic of Korea, betrayers. You should be careful of yourself. Okay?”

Baek said he stopped the altercation and returned to his table.

In response to mounting criticism, Lim issued an apology for “inappropriate remarks.” She said, “I got so upset when the North Korean defector said my aides ‘deserve to be shot in the North’ and the word ‘betrayer’ refers to Representative Ha joining the ruling Saenuri Party, because he and I used to be student activists fighting for reunification. It was not a reference to all North Korean defectors.”

In June 1989, Lim made an unauthorized visit to the North as a representative of pro-North Korean students and attended “The World Young Students Festival” held in Pyongyang. She spent 46 days there and returned to the South through the border village of Panmunjom.

She was sentenced to five years in prison for violating the National Security Law in December 1989 and was released in 1992.

Speculation is mounting that she will be labeled a “pro-North” lawmaker like members of a faction of the Unified Progressive Party.

“I don’t think I have to respond to the incident because she seems to had been drunk,” Ha told the Korea JoongAng Daily.