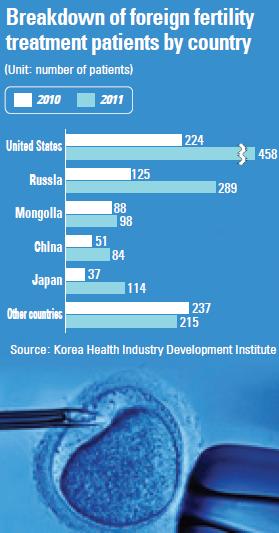 Three years have passed since Korea opened its doors to foreign patients seeking medical services outside their homelands, and a new - and perhaps unexpected - segment of treatment has sprouted in the recent years.

While many foreigners visit Korea for comprehensive physical check-ups, cosmetic surgery and dermatological treatments, more and more couples are coming to make their dreams come true.

“I think it was one of the best things that I have done in my life,” said Kim, a 39-year-old mother of a one-year-old daughter and a housewife living in New York. “Many of my friends living in Seoul have told me so many success stories that we decided to come here for in vitro fertilization.”

Kim, who moved to the United States from Korea with her family during her middle school years, said her insurance plan did not cover the cost of the expensive procedure, estimated at about $15,000 at an American clinic.

In Korea, in vitro fertilization costs vary from patient to patient, but most treatments don’t cost more than 10 million won ($8,490).

After making arrangements through her relatives in Seoul, Kim and her husband visited Korea in 2010 and stayed about 10 weeks for her medical check-up and fertility treatment. “And we were so blessed that we succeeded at our first attempt,” she said.

Kim is one of the growing numbers of foreigners who are trying to have babies through in vitro fertilization at Korea’s hospitals.

According to Chung Chu-won, head of the International Health Service at the Cheil General Hospital, the number of foreigners visiting the institution for fertility treatments has skyrocketed over the recent years.

Chung said the sudden rise started when the country revised the Medical Service Act in 2009, allowing hospitals to promote its programs to attract patients from overseas.

He said most of the foreign patients receiving fertility treatments at the hospital are from Russia, while some are from Mongolia and Uzbekistan as well as other countries. Ethnic Koreans with U.S. citizenships and permanent residency also visit the hospital for treatment, Chung said.

According to the Ministry of Health and Welfare, 2,091 hospitals and clinics around the country are operating programs to appeal to foreign patients, while 324 agencies are providing services to foreigners visiting Korea for medical services, as of last year.

The ministry data showed that 122,297 foreign patients were treated at 1,383 hospitals and clinics last year, earning 180.9 billion won in profits. Since the revision of the Medical Service Act, the number of foreign patients treated at Korean hospitals rose from 60,201 in 2009 to 81,789 in 2010.

According to the state-run Korea Health Industry Development Institute’s record, 762 foreign patients were treated for fertility treatments in Korea in 2010, and the number jumped to 1,258 last year. Among them, the number of patients from the United States went up from 224 to 458, while patients from Russia also went up from 125 to 289.

The institute official said the numbers are just official statistics, and the actual numbers of patients would be higher than the records.

“Most of our fertility treatment patients are from Russia, because we paid special attention to promote our programs in that country,” Chung of the Cheil General Hospital said. “They used to visit Europe, Singapore and Thailand, but they are now turning to Korea because the country’s medical service is competitive in quality and price.”

He said Europe was once a popular destination for Russians to receive fertility treatment, but the high cost became a turn-off. The hospital not only promotes its fertility treatment program to attract Russian patients, but also established ties with the country’s hospitals and clinics to train doctors there, Chung said.

“Most Russian patients coming to me said the fertility treatment in their country is about the level of Korea in the 1970s,” said a doctor at the hospital, who asked not to be named. “And they said the cost of the in vitro treatment is about the same, but the success ratio was not as high as that in Korea.”

A survey conducted by the Korea Health Industry Development Institute and released by the Ministry of Health and Welfare in April showed the competitiveness of the country’s technology for fertility treatments. According to the survey of 1,830 medical experts, the United States is rated as having the most advanced medical technology in 33 out of 34 areas ranging from cancer treatment to stem cell research. China was rated the most advanced in oriental medicine.

According to Chung of the Cheil General Hospital, in vitro fertilization requires a patient to stay at least six weeks in Korea to receive the treatment.

As state health insurance does not cover the process for a foreign patient, it requires about 6 to 7 million won for the treatment alone, while the patients spend more on travel and lodging. It is also the patient’s responsibility to hire an interpreter.

“Since the Medical Service Act was revised in 2009, a new industry of service agencies providing care and arrangement for foreign patients has popped up,” Chung said. “Most of the patients use the agencies, because it’s hard for them to take care of the visa, lodging and interpreter on their own in an unfamiliar country.”

As demand grows, more and more agencies are opening up in Korea. BTMedi is one agency providing consulting, arrangement and interpretation services for foreign patients visiting Korea.

“It’s been two years since I started the business,” said Kim Yeong-seob, the CEO of the company. “I am confident that this is an industry with great potential. I think the number of foreign patients will grow for the next five years; so does the agency.”

According to Kim, most of his customers are patients from Russia. “Patients from the United States are often Korean-Americans,” Kim said. “And they normally don’t need our language service, but patients from other countries require more arrangements. In addition to Russians, I see a growing number from China, the Philippines and Malaysia.”

He said the company does practically everything for the patient. “Often, they already have information about specific doctors and specific hospitals where they want to be treated,” Kim said. “They prefer fertility treatments at the Cheil General Hospital, Cha Hospital and Miz Medi Hospital, but they also go to other places as well.”

“And we make appointments for them, provide interpreters with special knowledge in medicine and arrange their accommodation and transportation. If necessary, we also help the patients with flights and documents for medical treatment visas. We act as their guardian during their stay here.”

According to Kim, the price largely varies depending on the patient’s choice of accommodation. “For in vitro fertilization, we will need to stay near the hospital for at least six weeks,” he said. “Patients often prefer residence hotels, where they can have living facilities such as a laundry machine and a kitchen.”

And as more and more foreign patients have come to Korea for treatment, a hospital has opened up inside a hotel to cater to their needs. Seoul Rachel Women’s Clinic, specializing in fertility treatment, opened last year inside the Lotte City Hotel in Mapo-gu.

“In addition to the hospital bill, which costs between 7 million won to 10 million won, you have to think about the long-term lodging, at least 2 million won,” Kim said. “And there are other costs, like paying for meals, hiring an interpreter and a car whenever needed and sometimes tourism and shopping.”

Kim said his company also charges a fee for providing the service, but declined to discuss the specific amount, because the price would also vary depending on a patient’s need.

While Korea’s competitiveness in fertility treatment is expected to bring in more foreign patients, Kim said he still sees a challenge. “We currently have four full-time Russian interpreters and four other part-time interpreters,” Kim said. “They all have specialties in medical terms, but the challenge for this growing business is finding more professionals with such skills.”