‘The Hunger Games’ gobbles up 4 golden popcorns at MTV awards

‘The Hunger Games’ gobbles up 4 golden popcorns at MTV awards 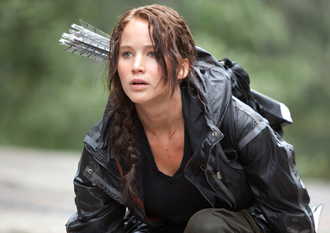 LOS ANGELES - The fan votes - not just the odds - were in “The Hunger Games’’ favor at the MTV Movie Awards.

“I’ve wanted to hold a golden popcorn since I was 4 years old,’’ beamed Hutcherson.

With four wins out of eight nominations, “Hunger Games’’ didn’t completely decimate the competition. “Harry Potter and the Deathly Hallows - Part 2’’ won prizes for best cast and best hero, while “The Twilight Saga: Breaking Dawn - Part 1’’ won for movie of the year, and “Twilight’’ stars Kristen Stewart and Robert Pattinson locked the best kiss trophy for the fourth straight year.

“God, Rob’s not here, you guys. I don’t really know what to do,’’ said Stewart, who pretended to make out with herself.

“Bridesmaids’’ walked away with two awards, though the wins weren’t televised. The cast of the naughty comedy won best gut-wrenching performance for the scene in which the ladies battled food poisoning, and Melissa McCarthy won the best comedic performance award.

The live, fan-favorite ceremony was hosted by bawdy actor-comedian Russell Brand. He opened the show by poking fun of Michael Fassbender’s full-frontal endowment in “Shame’’ and Kim Kardashian’s short-lived marriage, which he acknowledged was hypocritical. (Brand filed for divorce last year from pop superstar Katy Perry, who performed at the Brand-hosted MTV Video Music Awards in 2009, after 14 months of marriage.)

In lieu of a wordy acceptance speech for his MTV Generation Award, the show’s version of a lifetime achievement trophy, Johnny Depp performed with The Black Keys. Steven Tyler and Joe Perry presented the award to the 48-year-old “Pirates of the Caribbean’’ star, who accompanied The Black Keys on guitar for “Gold on the Ceiling’’ and “Lonely Boy.’’