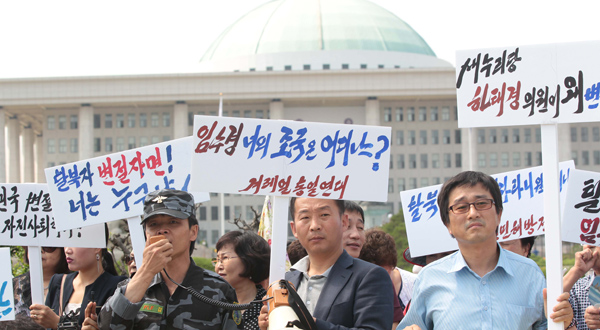 
Lawmaker Lim Soo-kyung of the opposition Democratic United Party yesterday made a second apology for calling North Korean defectors “traitors” in an alcohol-fueled tirade at a Seoul restaurant Friday night.

Appearing at a party workshop in Yangjae-dong, Lim, who was jailed for three and a half years for making an unapproved trip to North Korea in 1989, said: “The whole controversy was prompted by my lack of virtue and I sincerely apologize to everyone who would have been hurt by my inappropriate remarks. My beliefs and thoughts aren’t like that. I hope North Korean refugees settle down and live a stable life.”

In an altercation in a restaurant in Jongno District, central Seoul, Friday night, Lim called 28-year-old defector Baek Yosep a “traitor” and continued: “How can a son of a bitch like you, a North Korean defector of humble birth, come and challenge a lawmaker of the South Korean parliament?”

She then brought up the name of Ha Tae-kyung, another student activist from the 1970s and 1980s who started condemning the dictatorship and human rights abuses in the North. She described Ha, who won a seat in the National Assembly in the April 11 general election, as a “son-of-a-bitch betrayer.” She added, “I will kill him with my hand.”

Baek, who is secretary general of a local association of young North Korean refugees, wrote about the incident on his Facebook page.

“Baek said on Facebook that Representative Lim called him a traitor and given the context of the dialogue, the reason why she called him that was because he is fighting for North Korean people’s human rights,” Ha said.

“But she didn’t admit the fact that she regarded Baek a traitor. Lim should have expressed why North Korean defectors are traitors and whom they betrayed.

“She is also trying to get through this crisis by using me as a scapegoat,” Ha continued. “At the restaurant, she condemned me because I’m a human rights activist for North Korea, but now she says she did it because I defected to the ruling party.”

Left:Lim meets North Korea’s founder Kim Il Sung in July 1989. She went to the North without approval, and was jailed for violating the National Security Law. Captured from North Korea state media by the New Daily in Seoul. Right: Lim Soo-kyung, a lawmaker from the Democratic United Party.[NEWSIS]

“Those pro-North lawmakers who are silent on North Korea’s human rights abuses are the real ‘traitors,’” Ha said. “The reason I didn’t move into the DUP but chose the ruling party is because the DUP didn’t allow me to continue my job as a human rights activist.”

“The DUP should forfeit her position as a lawmaker and make a vow in front of all the 100,000 North Korean defectors worldwide, including the 24,000 in the South,” they said in a joint statement. “The defectors you are calling ‘traitors’ protested the dictatorial leadership and risked their lives to seek freedom.”

The statement continued: “Lim will become an enemy of 24,000 defectors forever.”

They also demanded the DUP express a clear position on some politically sensitive issues involving North Korea, such as the sinking of the warship Cheonan and the third-generation dynastic succession in the North.

Park Jie-won, the DUP’s chairman, told reporters yesterday at the party’s workshop that he won’t expel or punish Lim for her remarks because she made an official apology.