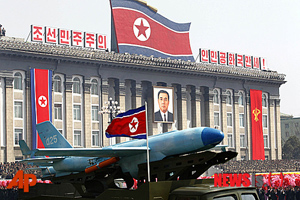 Pyongyang yesterday warned they would stage a military attack against Seoul’s local media companies, suggesting that they would precisely strike them by detailing their exact geographical locations.

North Korea’s general staff of the army issued a statement titled “The Traitors’ Group Should Make a Final Decision.” In that statement, the regime heavily condemned South Korean reporters who denounced their recent national event held in Pyongyang.

“Currently, in our revolutionary capital Pyongyang, we are holding a ceremony to mark the 66th anniversary of [North Korea’s] Youth Foundation,” the statement said. “Still, only the traitor groups of Lee Myung-bak in the South are behaving badly, pouring cold water on this happy occasion for our children.

“Starting from May 29, they are clinging to new kinds of evil acts, mobilizing local media such as the Chosun Ilbo, JoongAng Ilbo, Dong-A Ilbo’s Channel A, KBS, CBS, MBC and SBS,” it said. “They are saying out of malice that the scene of our children enjoying happiness at the ceremony is a fake show set up intentionally.”

South Korean reporters criticized the large-scale event on Sunday, saying the new leader Kim Jong-un is trying to buy affection from children who will become the next generation to support his rule, while older people are starving to death. Some likened Kim Jong-un to Adolf Hitler.

It said they are waiting for the order to fire, even giving the exact coordinates by saying, “The [headquarter] of the JoongAng Ilbo is located in Jung District, central Seoul, which is 37 degrees, 33 minutes and 45 seconds north of the equator .?.?.”

Referring to the statement as an “ultimatum,” Pyongyang said they will “stage a sacred war” unless the “traitors’ group” make an apology for the media’s malicious reports.

The Ministry of Unification called the statement “a grave provocation.”

“Threatening media, which is an icon of democracy, is a grave, provocative act,” Kim Hyung-suk, the ministry’s spokesperson said at a briefing yesterday. “We want them to stop immediately.”

In mid-May, Pyongyang also threatened to conduct a “special action” against South Korean media in “an unprecedented, peculiar way,” mentioning names of specific companies and calling them “puppets” of the current Lee administration.

“They have threatened several times to attack South Korean media previously, but it’s the first time that they mentioned the exact geographical locations,” Park Soo-jin, deputy spokesperson for the Unification Ministry, told the Korea JoongAng Daily.