UPP’s Lee says he has no intention to resign

UPP’s Lee says he has no intention to resign 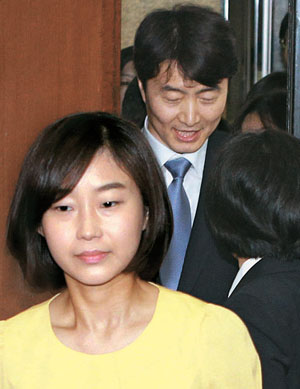 Lee Seok-gi, a newly-elected lawmaker who is at the center of the controversy over the Unified Progressive Party’s primary rigging scandal, appeared at the National Assembly for the first time since he started his term and told reporters he wouldn’t resign.

The 50-year-old Lee appeared yesterday to attend the first regular session of the 19th National Assembly. Reporters swarmed him and asked what he thinks of the party’s interim leadership’s attempt to expel him and three other members.

“I’m waiting for the party leadership’s decision,” Lee said. “At this moment, I don’t have any intention to resign.”

Despite public uproar over the primary scandal that many believe was rigged, four candidates have resisted pressure to step down. The other 10 candidates have already tendered their resignation. Among the four remaining, two lawmaker-elects, Lee and Kim Jae-yeon, are taking especial heat. The party’s largest faction, the pro-North Gyeonggi Dongbu Alliance to which Lee and Kim belong, are backing them and demanding a new investigation.

Lee himself also drew public criticism by publicly saying “the problem is not being pro-North, but pro-U.S.”

Asked what he thinks of the ruling Saenuri Party’s presidential frontrunner, Park Geun-hye, who recently suggested Lee and Kim be kicked out from the legislature, Lee said that her suggestion is like “the Yushin Constitution,” the authoritative rule by the late president Park Chung Hee, her father. “I feel like I’m seeing a revival of the Yushin,” Lee said. “Under Park Chung Hee’s military dictatorship, a number of democratic activists were murdered by the then-legislature. I think [forfeiting my position] is also a form of the legislature’s attempt to kill me.”

When asked whether his pro-North stance or the primary scandal could make a negative impact on the relationship between the DUP and the UPP to form a further alliance ahead of the presidential election, Lee briefly said, “We need to see [what’s going on] carefully.”