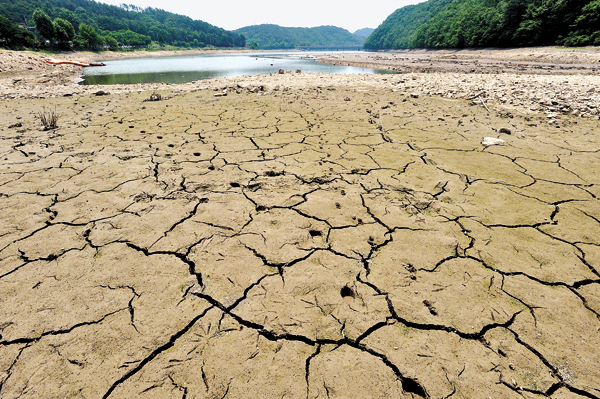 The shoreline of a reservoir in Daejeon has drastically receded due to lack of water on Monday. By Kim Seong-tae


Come June, most farmers are supposed to be done with rice planting and have their fields properly irrigated. But many of the rice paddies in a village one kilometer (0.62 miles) from Yedang Reservoir, one of the biggest reservoirs in South Chungcheong, were drier than normal due to abnormally high temperatures and lack of moisture in May.

About 30 percent of a total of 4,620 square meters (1.14 acres) of rice paddies in the village were not able to finish rice planting due to a lack of water.

“We have to give up growing rice this year if it doesn’t rain within 10 days,” Joo Woo-seon, the head of Gwangsi Township in South Chungcheong, told the JoongAng Ilbo.

“We dug to find groundwater but failed.”

The lack of moisture has impacted dry land farming. Potato and garlic crops this year are also suffering.

The central region of Korea, including the Chungcheong region, is suffering from a significant lack of moisture, causing farmers to delay rice planting.

The Ministry for Food, Agriculture, Forestry and Fisheries said on Monday that only 82 percent of farmers in the country completed their rice planting as of Friday.

“Rice planting is usually finished by June 10 at the latest,” a spokesman for the ministry said.

He added that the rainfall in May was only 10 percent of last year’s and said that abnormally high temperatures are exaggerating the damage.

The rainfall in May for South Chungcheong was 168 millimeters (6.6 inches), down from 301 millimeters last year.

“The high-pressure system generated between the Yellow River and Yangtze River in China moved east and covered the entire Korean Peninsula, pushing away the trough of low pressure that generates rain to Jeju Island,” said Jeong Jun-seok, a spokesman for the KMA.

Jeju recorded 99 millimeters of rainfall in May, which was 2.6 millimeters more than last year.

“Sweet potatoes on our paddies are all dried out and I can’t even think about planting beans and chilies due to lack of rain,” said Kim Jong-cheol, 49, the head of Onsu Village in Incheon.

“The dry conditions will continue until the summer monsoon begins at the end of the month,” Jeong at the KMA said. He added that North Korea is also suffering from the worst drought in the last 50 years.