Exhibition from the Louvre comes with mythology theme

Exhibition from the Louvre comes with mythology theme 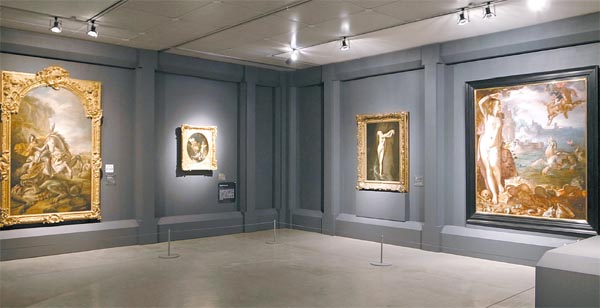 A room of the “2012 Exposition du Musee du Louvre” is dedicated to works based on the myth of Perseus.

It is not the first time that a collection from the Louvre in Paris, one of the world’s most famous museums, has traveled to Korea. But the “2012 Exposition du Musee du Louvre,” which opened Tuesday, has one point that distinguishes it from the 2006 Louvre show and most other foreign exhibitions here. It comes with a theme - Greek and Roman mythology.

The 2012 Louvre show, which will continue until the end of September at the Hangaram Art Museum of Seoul Arts Center in southern Seoul, features about 110 pieces dealing with gods, goddesses, nymphs, heros and lovers that appear in the poems of Homer and Ovid.

“For this exhibition, four curating divisions in the Louvre have collaborated,” Louvre director Henri Loyrette said at a press conference Monday in Seoul. “It is a rare case. Most overseas exhibitions of our collection are planned by a single curating division.

“I hope the result of the collaboration will help Korean viewers look at the exhibits in the contexts of Greek and Roman mythology, which has contributed greatly to the formation of Western thoughts and languages.” 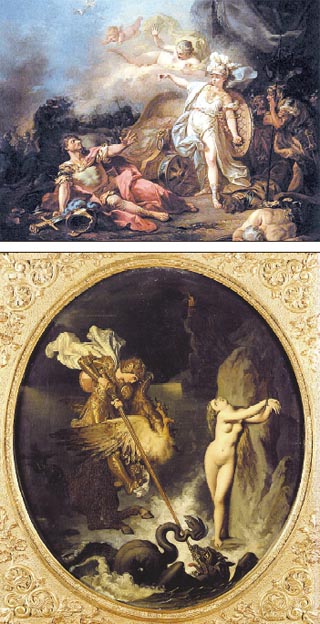 Top: Middle: “The Combat of Mars and Minerva” and “Angelica Rescued by Ruggiero,” above, are also part of the show. Provided by the Louvre

Most of the exhibit’s works are paintings, such as “The Combat of Mars and Minerva” by French neo-classical artist Jacques-Louis David (1748-1825). The allegorical painting depicts the defeat of the war god Mars (Ares in Greek) by the goddess Minerva (Athena in Greek), who represents wisdom and defensive battle.

Other pieces include 18th-century sculptures, such as the marble “Psyche and Cupid” by the Italian Antonio Canova (1757-1822), which depicts the famous lovers who have overcome hardships and wed.

Also on display are ancient Greek amphoras, vase-like vessels with long necks and two handles that are decorated with scenes from various myths.

Rather than being arranged chronologically or by genre, the exhibit groups pieces by theme, such as “The Love of Gods ­- Transformations and Abductions” and “The Trojan War.”

The “Love of Gods” section includes “Apollo and Daphne” by Italian Rococo painter Giovanni Battista Tiepolo. It shows Apollo pursuing the nymph Daphne as she begins her transformation into a laurel tree, shoots sprouting from her fingertips.

And between sections, visitors can see a large painting by Francois Gerard (1770-1837), an Italian-born French neoclassical artist.

It depicts a Greek boy about to place a flower garland on the head of a girl sleeping with her head on his knees, in a deep forest. It is from “Daphnis and Chloe,” the romance of a teenage boy and girl in an idyllic setting by the 2nd-century Greek novelist Longus.

For fans of Hollywood adventure movies inspired by Greek mythology, the favorite section will likely be the one dedicated to Perseus, whose story inspired the 2010 film “Clash of the Titans.”

Situated near the end of the exhibition, the section contains not only paintings and sculptures about Perseus’ adventure but also paintings inspired by legends and literature based on the tradition of the myth.

They include two works by another neo-classical painter, Jean-Auguste-Dominique Ingres (1780-1867), about an episode from a Renaissance epic poem in which heroic knight Ruggiero rescues princess Angelica by defeating a sea monster.

The scene in the painting resembles works that depict Perseus fighting a sea monster to save princess Andromeda.

Also included in the section is Charles-Andre van Loo’s 1741 painting “Saint George Hunting the Dragon,” based on the medieval legend.

Looking at so many artworks that are connected by theme, viewers will better understand how Western art and literature were influenced by Greek mythology.

Finally, the “2012 Exposition du Musee du Louvre” is a fine showcase for how artists put their individual stamp on old stories to make them new again.