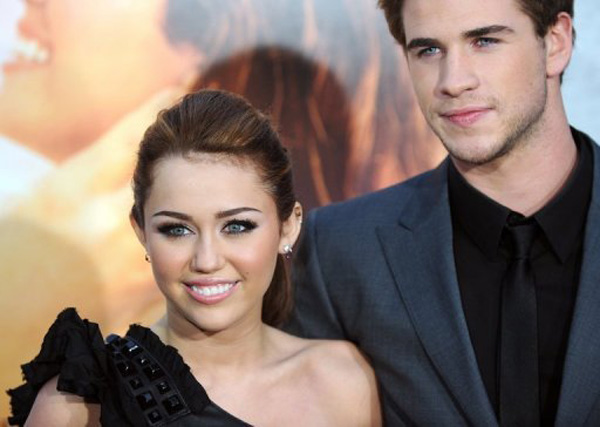 NEW YORK - Miley Cyrus, the former Disney Channel child star whose growing pains have been played out in the glare of the world’s media, announced her engagement on Wednesday at the age of 19 to “Hunger Games” actor Liam Hemsworth.

Cyrus, whose “Hannah Montana” TV series made her a teen idol, said she was engaged to marry her 22-year-old Australian boyfriend after a three-year romance.

The news quickly became one of the world’s top trends on Twitter, bringing thousands of congratulations from fans, as well as questions over the wisdom of settling down so young.

Cyrus and Hemsworth have been dating on and off since meeting in 2009 on the set of the romance film “The Last Song.”

“I’m so happy to be engaged and look forward to a life of happiness with Liam,” Cyrus told People magazine.

“Thank you for all the love today. I’m happy to share this news with you all. I feel like all my dreams are coming true,” she said on Twitter.

Cyrus’ father, country singer Billy Ray Cyrus, who starred with her on “Hannah Montana,” said he was delighted. “All I ever hoped for as a daddy was to see my kids reach their dreams. To find happiness, peace of mind and someday know true love,” he told HollywoodLife.com.

Hemsworth proposed on May 31 with a 3.5-carat diamond ring, according to People magazine. No wedding date was announced, but talk quickly turned to whether they were too young for such a commitment.

“A 3.5-carat diamond ring and an Australian fiance sound like a fairytale marriage, but teen pop star Miley Cyrus’ engagement raises questions about the idealized dream she’s modeling for the average teenager. In other words: Can teen marriages last?” asked Allison Terry, writing for the Christian Science Monitor.

The engagement was the main topic on female TV chat show “The Talk” on Wednesday, where “America’s Got Talent” judge Sharon Osbourne spoke up for the singer.

“I think that she is 19, but in her head she is an old soul. She has lived 19 lives in 19 years .?.?. She is an accomplished young woman, who knows what she wants at this time in her life,” Osbourne said.
Reuters