Woman at forefront of digitization

Woman at forefront of digitization 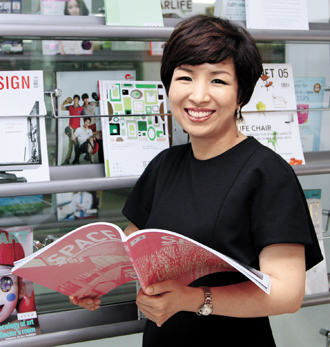 Koh Soo-young, a group leader at Samsung SDS, poses at the new Myongji University Library in northern Seoul. The library’s design is based on the new DSC system spearheaded by Koh. Provided by the company

Libraries are often called the hearts of universities, and today, digitalization is a top priority of these important institutions around the world. Coincidentally, digitalization of college libraries led by a female IT expert in Korea has attracted global attention.

Koh Soo-young, a group leader at Samsung SDS, an “Information Technology Convergence” (ITC) business unit of Samsung Group, has developed a new concept dubbed “Digital Space Convergence” (DSC) by building highly digitalized libraries at 10 prestigious universities in Korea. The DSC business aims to create an efficient and comfortable space by combining design with information technology. It is considered a blue ocean in the system integration industry. The global DSC market is forecast to grow up to 30 trillion won ($25.5 billion), according to the industry.

Around 10 million books have been digitalized in Korea so far. Hearing about this trend, renowned universities in the United States, such as the Massachusetts Institute of Technology, Stanford University and Indiana University Bloomington, are eager to learn about the DSC concept. Seoul National University and Sejong National Library, a new library under construction in Sejong City, are also considering digitization.

Koh is trying to expand the domestic DSC business across the world. She won an order from the University of Birmingham in Britain last month.

An alumna of Dong-A University with a degree in arts, the 41-year-old Koh has been an unlikely presence in an industry dominated by engineering majors. She joined Samsung SDS in 1997 with the dream of producing animated movies like “Toy Story.” However, the Asian financial crisis that broke out in the following year was a hindrance to realizing her dream. Because the animation business was considered too costly during the financial crisis, Koh wasn’t able to focus her work there.

However, she didn’t give up on her dream. Koh’s active and bright personality helped her find a new opportunity, she recalled. She did not wait for a chance to come, and instead approached Korea University when she saw a public notice about its plan to construct a new media center.”

“I was so confident that I just ran up to the school,” she said.

And her efforts bore fruit. She eventually participated in designing the Digital Media Center at Korea University.

A sea change in the stagnant SI industry served as another opportunity for Koh. Experts with unique and outgoing personalities became more popular among clients.

“I couldn’t reach the master’s level either in the arts or IT, but I created a new territory of DSC, a mix of the two. And I have become an expert in this area,” she said.

She once doubted the usefulness of her arts degree, but her design skills played a key role in the plans for the digital libraries.

“DSC is being applied to a few public places like libraries right now, but the concept will certainly be useful at other places, including cultural centers and resorts,” Koh said.

“A new era will come where IT companies will be able to build libraries like construction companies,” she added.