Making a name for herself with trendy DEBB line

Making a name for herself with trendy DEBB line 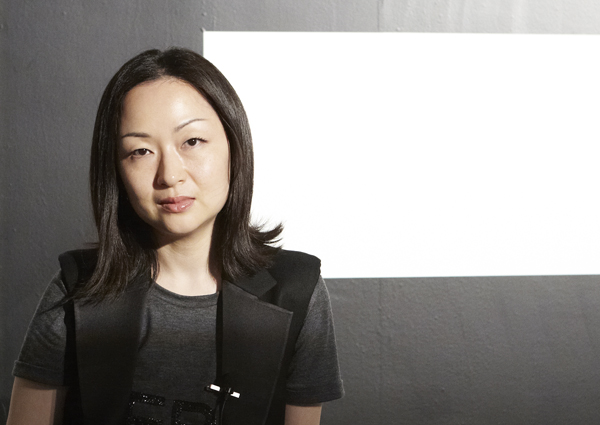 SINGAPORE ­- Local fashion brand Andy & Debb is somewhat of an anomaly in Korea. As a high-end womenswear line that prides itself on quality fabric and classic tailoring, it is one of the few homegrown labels to survive the tumultuous economic tide of the past decade. Without any celebrity-fueled marketing schemes or flashy promotional campaigns, the brand has managed to make a name for itself in the luxury clothing market in a country with an insatiable appetite for big, foreign luxury names like Louis Vuitton, Chanel and Prada.

“Sometimes, when I look back, I can’t believe it has been that long. I think you just have to believe in your dream and push on,” said Wonjeong Debbie Yoon, co-director and designer of Andy & Debb along with her husband, Andy Seokwon Kim. 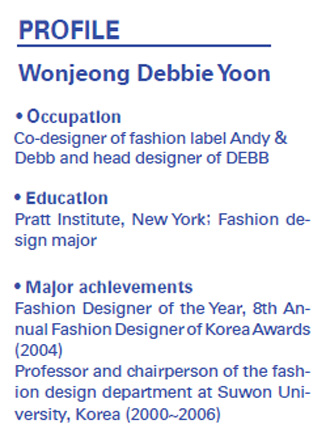 The more recognized face behind the label is Kim, whose five-year stint as a judge for Project Runway Korea, the licensed Korean version of the highly popular design competition in the United States, has cemented his image as the articulate, effortlessly chic and hard-to-please critic of the show.

Out of the limelight, acting as the anchor for the brand is Yoon. Last year, the designer stepped out on her own for the first time, launching DEBB, a contemporary womenswear line featuring trendy, ready-to-wear clothing that Yoon says is for “the modern debutante.”

At the Asia Fashion Exchange last month, held in Singapore, Yoon showcased her line for the first time outside Korea during the Blueprint Trade Show, amid favorable reviews and attention from big name buyers in Asia.

The Korea JoongAng Daily met up with Yoon during the Asia Fashion Exchange last month and discussed the designer’s ambitions for her new line of clothing and how it is to work as half of a husband-and-wife duo.

Q. Tell me about your new contemporary women’s ready-to-wear line, DEBB. How did it come about?

A. To start from the beginning, Andy and I spent most of our 20s in New York, studying and working in the fashion industry there. When we were in our early 30s, we came back to Korea to launch our own brand, Andy & Debb. When I was living in New York, I really connected with how people dressed in that they kept the classic elements but also embraced various trends and vintage clothing in that realm as well. Because Andy & Debb is a brand that has a high price point, I always wanted to do something more casual and design clothing that was a bit more casual and fun.

I think contemporary lines are getting bigger and bigger globally. Looking at New York, for example, brands like 3.1 Phillip Lim and Alexander Wang are becoming more important in this market. It is important for me to keep the quality up for Andy & Debb, but when I thought of the brand’s future, there needed to be a contemporary line in order to maintain our influence in this market. DEBB has quite a different aesthetic compared to other contemporary brands in Korea because the clothing is not about just following trends ? it has a unique aesthetic that combines a New York style vintage feeling with a modern touch.


You say many of your design influences come from your time spent in New York. What does the city mean to you?

It might sound a bit trite, but for me New York is like a second home. As I said, Andy and I both spent our 20s there. We moved there to study at the Pratt Institute after finishing high school in Korea. My parents still live in New Jersey, which is close to New York. Whenever I travel to New York, even now, I get this strange sense of nostalgia, as if I’m that twentysomething girl living there. My 10 years in New York have become the foundation of Andy & Debb and it also taught me how to fight and compete in the international market.


Did you always think you were going to become a fashion designer?

My mother was very fashionable. She didn’t necessarily wear cutting- edge fashion, but she always dressed very classically chic. From her, I grew up with a respect for well-made clothing and fashion in general. I never thought I’d become a fashion designer, though, and I actually wanted to become a doctor.

I was quite good in school and was studying to get into medical school, but one day in high school I injured my wrist during gym class. I had to go to the emergency room at night with my mother and in came a female medical resident, wearing a wrinkled, dirty-looking uniform, who had such a tired expression on her face. I thought to myself, “If that was my life after medical school, would I be happy?” And it didn’t seem like I would be. I began looking for things I could do that would make me happy and I realized that I wanted to make clothing, so I moved to New York.


Working as a husband-and-wife duo - running a company and designing together - must be hard sometimes. Do you and your husband share tastes in fashion?

We both like minimal things, but when we are designing for Andy & Debb, Andy focuses more on structure and construction, while I tend to focus on color and texture. Andy & Debb is a mix of our aesthetics while DEBB reflects more of my style.

I describe the DEBB label as clothing for the modern debutante. In the past, debutantes were 16 or 17, but now the word can be stretched to mean a young woman who goes out into society of her own volition. I wanted to create a collection with clothing that a modern day debutante can wear for all occasions, whether it be casual, chic, girlish or sexy.


Your husband is perhaps the more recognized face of Andy & Debb because he is one of the judges of Project Runway Korea. What has this been like for you?

I think that the show definitely brought more public awareness of our brand. In the past, those that bought Andy & Debb clothing were usually people who were really into fashion and had a lot of knowledge about it. Also, we sold mostly in Seoul. However, with the show’s popularity, the brand is now well known outside the capital. We often meet students on the street who want Andy’s signature. It’s almost like celeb status. [laughs] Even in New York, it’s so funny because people come up to Andy and shout, “Korean Michael Kors [the American designer who is a judge on the original Project Runway series]!” 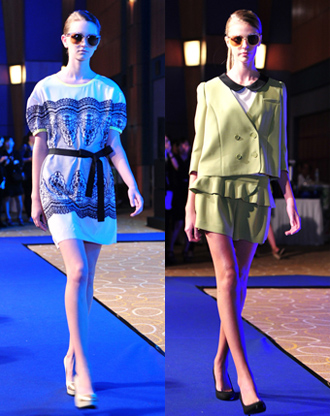 
Are there any negative things coming from the exposure?

We haven’t encountered a lot of negatives yet. The program itself is quite design-oriented and professional and it served us well for Andy to have this image of the level-headed critic. Maybe at first, there were some comments online from people who didn’t agree with some of his comments on the show, but not everyone can agree on things, so it’s ok. But I think in the future, we need to focus on being designers.


Do you have any advice for fashion students or those just beginning in fashion?

You have to believe in yourself and your dream. They say that the world economy is very volatile and the retail market is harsh, but when we started 10 years ago, building our brand, it was the same thing. It was tough but you need a steadfast strength which comes from believing in your vision no matter what happens.